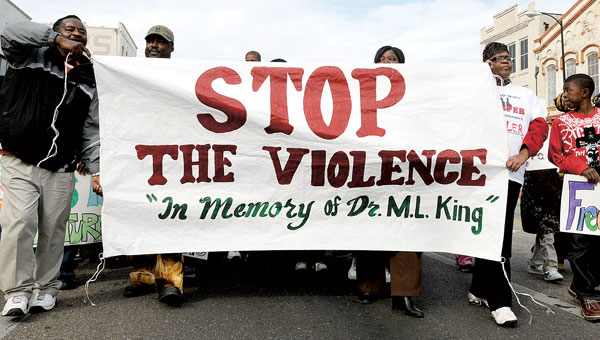 More than 100 marchers took their place in Monday’s “Stop the Violence” march, designed to coincide with the national Martin Luther King, Jr. Day. The marchers began their march at the historic Brown A.M.E. Church and made their way to the foot of the Edmund Pettus Bridge, where they held a non-violence rally. -- Rick Couch

“We are the Dream,” were the words written on bright, multicolored T-shirts worn by more than 100 children and adults at Monday’s “Stop the Violence Rally” sponsored by the Safe Haven Center.

Chuck Clark, a volunteer from Denver, believes children are the future.

“There’s a feeling in Selma that nothing can be done,” Clark said. “Unless people everywhere come together and help kids, then nothing is going to happen or change.”

Collins Pettaway Jr., an attorney for more than 26 years, said stopping the violence is a community responsibility.

“I’ve been to thousands of rallies, and we have to stop this by love,” Pettaway said. “We have to give young people several options and then we can stop this nonsense.”

Mark Myles, an ex-gang member, believes the solution to ending violence is going out to the bad neighborhoods and connecting with perpetrators.

“We need to see how we can effectively bridge the gap,” Myles said. “We need to let people, especially young men, know they don’t have to sell drugs or be in a gang, but there are options.”

Even children understood the importance of Monday’s event.

“I wanted to come out here today, and I was curious,” said Kareem Ross, Jr., from Valley Grande Elementary.

This is Ross’ first “stop the violence” rally.

“I believe King wanted us to stop the violence and keep the world a peaceful place,” Ross said.

Shaey Kratochuil, a senior at Dallas County High School, said this is his second rally. He believes there’s a lot young people can learn from the rally.

“We can learn about the past and not make the same mistakes,” Kratochuil said.

Woody Vaughn, who traveled from Atlanta with his son, said coming to the rally was important to him.

“I’ve gotten to know a lot of kids,” Vaughn said. “There’s a great number (of kids) out here and the rally helps to reinforce integration. You see how the kids are trying to do stuff, and I wanted to be a support.”

Freedom Foundation member and technical director of the event, Jayme Farnsworth, said the cause is important.

“Change starts with us,” Farnsworth said. “It’s just so cool to see the youth together and to see them make a change. No matter what color we are, we’re all the same.”

Volunteers give day of service