Bentley takes over as governor 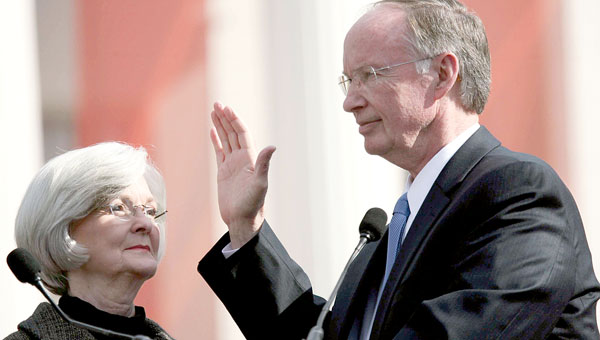 Gov. Robert Bentley speaks to guests after he was sworn into office on Monday Jan 17, 2011 on the steps of the Capitol in Montgomery, Ala. -- (AP Photo/The Tuscaloosa News, Dusty Compton)

MONTGOMERY — Robert Bentley began his term as Alabama’s governor Monday with a promise to the people to be a servant leader like Jesus and a warning to the federal government that he won’t let it force policies on his state.

“We will work with the federal government when we can, but they will not dictate our every move,” he said to loud applause.

Bentley’s inauguration played out in front of a state Capitol decoraged with banners portraying the sunrise of a new political day. He completed his transition from physician and former legislator to governor by taking the oath of office on a Bible used by every Alabama governor since 1853 and by Jefferson Davis when he became Confederate president 150 years ago.

In a state that has long trumpeted states’ rights, Bentley’s speech was reminiscent of Gov. Fob James’ inauguration in 1995, when James hung a banner across the front of the Capitol showing the 10th Amendment, which reserves rights for the states.

“If nothing else, the 2010 elections told us the people of America are fed up with business as usual. They are tired of partisan politics, and most of them are tired of the federal government,” Bentley said.

“As elected representatives we answer to you the people of Alabama, not to politicians and bureaucrats in Washington. I will defend our right to govern ourselves under our own laws and to make our own decisions without federal interference,” he said to more loud applause.

Republican state Sen. Trip Pittman of Daphne said Bentley’s remarks stem from the physician’s opposition to the federal health care plan and his belief that a one-size-fits-all federal policy does not work with 50 different states.

Rep. Barbara Boyd of Anniston, vice chair of the House Democratic Caucus, said she agreed with much of what Bentley said, but not his comments about the federal government. She said Alabamians should remember that the federal stimulus plan provided badly needed money to keep state social services running and teachers working.

Bentley said his goal as governor is to be a servant leader in the biblical sense.

“Jesus showed his disciples by example that in order to be a great leader, you must first be a servant,” he said.

“I will never forget that no matter what my official title may be, I am a servant of the people,” he promised.

Bentley started his campaign for governor 1½ years ago near the back of a seven-candidate field for the Republican nomination. He began to draw attention when he told voters, “Alabama is hurting and we need a doctor.” He also promised to work without pay until Alabama’s unemployment dropped back to normal from the highest levels in 26 years.

He recalled that promise Monday and said his top priority is to get Alabamians back to work with a variety of approaches, including giving existing Alabama businesses the same tax breaks that new companies get when they create jobs and by building a convention center in Gulf Shores to attract more tourists to the Gulf Coast.

Speaking to state employees, he said: “State government needs an attitude adjustment. If you work in state government in Alabama, job creation must be your focus. This is a directive from your chief executive.”

Not all of Bentley’s first day in office was about goals for the next four years. At one point, he stopped to sign an excuse for a young boy and some classmates to skip school to attend the inauguration.

In the festivities, Bentley saluted his hometown of Tuscaloosa by having the University of Alabama Marching Band lead his inaugural parade and by having the Stillman College choir sing “God Bless America” before he took the oath of office.

Many in the crowd were from Tuscaloosa. Patrick and Donna Gray said they participate in the Sunday school class that Bentley teaches at the First Baptist Church of Tuscaloosa and wanted to bring their 7-year-old daughter, Katherine, to see their teacher become governor.

Katherine was not nearly as excited about Bentley’s speech as she was about what was to come a few hours later.

“What she’s looking forward to most is dancing with her father at the inaugural ball,” her father said.

More than 100 marchers took their place in Monday’s “Stop the Violence” march, designed to coincide with the national Martin... read more