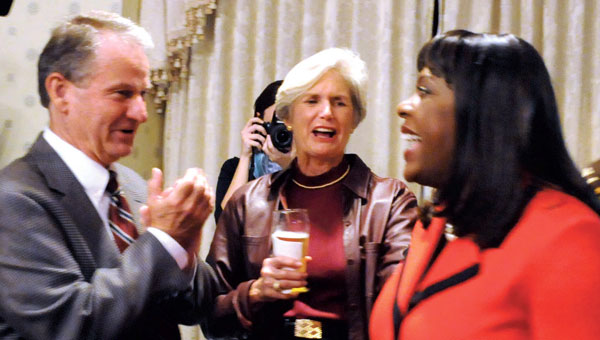 Terri Sewell talks to supporters at the St. James Hotel in Selma during her celebration party. Sewell became the first black woman to be elected as a Representative for Alabama. -- Rick Couch photo

A piece of history was again brought to Selma Tuesday night during Terri Sewell’s victory party at the St. James Hotel.

Despite her historic victory, Sewell said the election was bigger than she.

“This win is not about me,” she said. “This win is for the 7th Congressional District. I am so honored and humble to have the opportunity to represent home.”

Sewell said she spent her formative years in Selma and deemed it an honor to return to the hotel that sits at the foot of the Edmund Pettus Bridge to “carry a torch that so many women have paved the way for.”

“It went as we expected it to,” Chamberlain said. “A lot of money came in from Washington and we just didn’t get our message out there like we wanted to.”

At the same time, Chamberlain said he supports Sewell and hopes she is able to make strides for the Black Belt in Washington.

“She ran a clean campaign, it never got nasty like some of the other races,” he said. “I wish her the best of luck.”

When asked about positive influences in her life, Sewell said she could look no further than her immediate family.

“I have a wonderful role model in my mother,” she said. “Some people ask me where do you get your tenacity. My mom was the first African-American woman to sit on the city council of Selma and was also the person who gave me my first book. I traveled through those books long before I ever had this chance.”

There will be little time for celebration, Sewell said, so she can hit the ground running.

As she greeted friends, family and supporters, Sewell reflected that her election to the 7th District brought her full circle.

“I started here in Selma and there was never a time when I didn’t think that I could achieve and be whatever I wanted,” she said. “That is not only a testament to my mom and dad, it is a testament to a whole community.”

An investigation of a disabled vehicle led to two drug arrests by the Selma Police Department. According to Sgt. Doug... read more