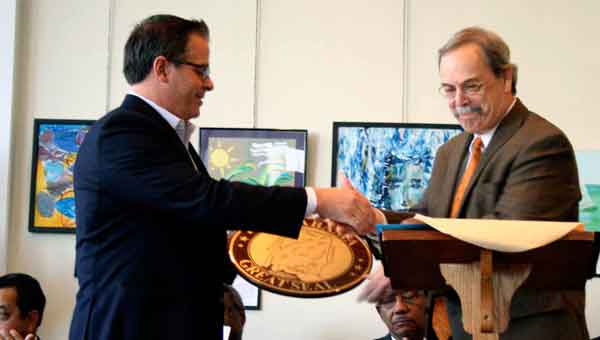 Plantation Patterns President Scott Crumrine, left, accepts the Great Seal of Alabama from Gary Faulkner, a representative of the Alabama Office of Development Thursday after the company announced it is expanding into Selma. -- Rick Couch photo

SELMA — A total of 100 more jobs over three years will come to the Queen City because Plantation Patterns Furniture Co. is expanding.

The company, owned by Home Casual LLC of Fitchburg, Wis., will spend more than $1 million to broaden operations from the location at Craig Field Industrial Park to two locations in the city, said Wayne Vardaman, executive director of the Selma & Dallas County Economic Development Authority.

Scott Crumrine, president of Plantation Patterns, said the extra space would allow the company to manufacture the fiber it uses to stuff the cushions for the outdoor furniture it makes at the location at the industrial park.

The company now purchases about 2 ? million pounds of the fiber for its use.

“This vertical expansion will keep us competitive in a global market place while bringing additional jobs to the community,” General Manager Andy Hewitt said.

The jobs will come in stages of 50 for the next three years.

Hewitt told members of the Selma City Council Tuesday a majority, if not all, of the news jobs would be available to local people.

During its meeting, the city council approved tax abatements for the company’s expansion. Those abatements include exemption from property taxes for 10 years and a one-time exemption of sales and use taxes for construction, according to state law.

“That’s going to be a wonderful opportunity for our city,” said Mayor George Evans. “New jobs coming to the city, despite the economy.”