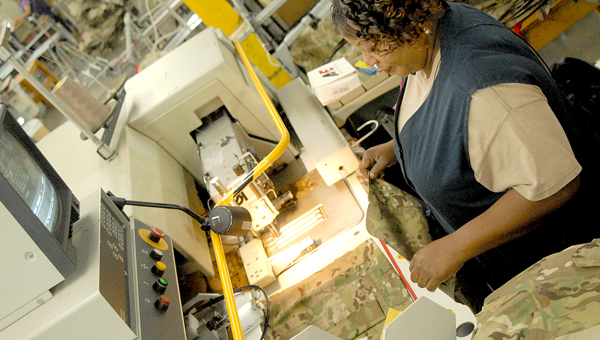 American Apparel employee Rosie Bennett works to complete an Army combat shirt specifically designed for combat operations in Afghanistan. Bennett has been an employee of the Selma-based company for 23 years. - Photo by Tim Reeves

For those not in taking an advanced geography course at a local high school or college, being able to put your finger on such places as Kandahar and the Hirat Province may be somewhat difficult.

But, the handiwork of some Selma workers will be providing the men and women serving in those areas much needed and now, more advanced, equipment.

Wednesday, officials with the Selma-based American Apparel announced they had been awarded three U.S. military contracts valued at $50 million to provide uniforms and uniform pieces for troops serving in combat operations.

Jim Hodo, the company’s chief operations officer, made the announcement during a press conference Wednesday morning, surrounded by members of his staff and team members from the Dallas County Economic Development Authority.

“American Apparel is fortunate to receive these contracts,” Hodo said. “These could not have come at a better time for us. This will allow us to prevent any future layoffs and give us the ability to bring back 40 recently laid off employees and hire about 40 more.”

For the Marines, American Apparel will produce a fire-resistant combat shirt and trouser to be used in combat operations in Afghanistan and Iraq. For the Army, the company will continue to manufacture combat coats with the Afghanistan-specific multi-cam camouflage pattern as well as a field coat liner.

In order to meet the demands of the new contracts, the company, in addition to hiring additional staff, will invest approximately $500,000 in building expansions and upgrades.

The plans are for the company to expand sewing and manufacturing operations into an already existing building on site, bringing the amount of heating and cooled manufacturing area to over 100,000-square feet. Some of that expansion work has already started.

Not only will the new contracts provide a much-needed boost to the company, which was facing the likelihood of more staffing cuts in the coming weeks, but will help the overall company that has five facilities in Alabama, grow the overall number of employees.

“Right now, we have about 1,300 employees throughout the state,” Hodo said. “I would expect these contracts to help boost those numbers to about 1,400.”

Aside from the Selma operation, the company maintains operations in Oneonta, Opp, Centre and Fort Deposit.

“American Apparel is one of the largest employers in Dallas County,” EDA Executive Director Wayne Vardaman said. “These new contracts mean that American Apparel will continue to be a viable part of the economy of Selma and Dallas County providing jobs to our citizens.”

The company said they would begin posting job openings on the Alabama Job Link (joblink.alabama.gov) and would be accepting applications from 7 a.m. to 3:30 p.m. at their location on the U.S. Hwy. 80 bypass.