Students move to the Wii 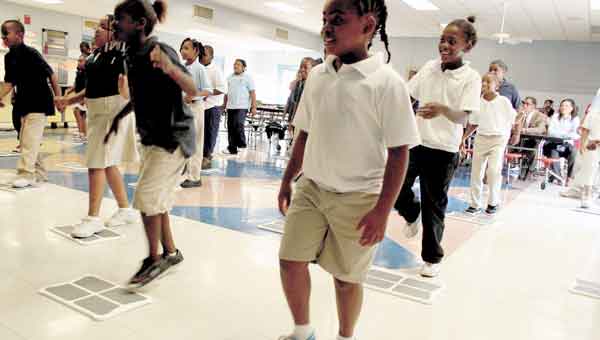 Zei’keya Rhodes, right, and Kendrika Billingsley, middle, follow the step aerobic movements at the kickoff event of “Wee Can Fight Obesity” at Sophia P. Kingston Elementary Tuesday. The school is one of six schools to pilot the program which uses Wii Fit Bundle to promote health and exercise. -- Laura Fenton photo

Sophia P. Kingston students are on the move.

The school is one of six elementary schools in the state to pilot the “Wee Can Fight Obesity” campaign, a statewide initiative conducted by Alabama State University to promote health and fitness through use of the Wii Fit Plus Bundle gaming software.

“The purpose of the study is to see if through the use of technology if we can impact the fitness level of the children to reverse some of the trends we have with obesity and overweight in our society, especially among our children,” said Charlie Gibbons, interim department head of the Health, Physical Education and Recreation Department at Alabama State University.

The program will be integrated with the physical education curriculum for the next eight weeks. ASU students recorded the body mass index for each third and fourth grade student, which will be compared with a post-measurement after the eight weeks are complete.

By combining an activity students already enjoy, Gibbons intends for results to prove this type of programming can positively influence fitness and health of students.

“We know they enjoy doing technology when they play the different games at home, but it’s always in a sedentary situation where they are not moving very much,” Gibbons said. “Now, we want them to get involved and use that technology, but this time use it when you are moving.”

Chris Wilkins, regional manager for the west region of the Alabama Sports Festival Inc., presented the school with $1,600 worth of equipment, including a console, Wii Fit Plus Bundle, EA Sports Activity, projector, screen for the projector, speakers, nunchucks and 30 balance boards. All equipment is on loan to the school.

He also presented the school with $200 for the physical education department as a gift for being a part of the pilot program. The money will be used to purchase more equipment for the initiative, principal Robert Carter said.

Students will use the equipment on rainy days and more than likely a weekly basis.

“I’m going to try to have it at least on a Friday or a certain day for it,” Carter said.

Jakoke Jones, 9, participated in the Alabama State Games this summer in Birmingham and placed third in the “Wee Can Fight Obesity” competition at the event. He competed in baseball, tennis and bowling on the Wii Nintendo system.

“I play every day when I get done with my homework,” Jakobe said.

The games are fun, but he does get sweaty from playing it for hours.

“It’s just not a game,” Jakobe said. “It’s a game that you can have fun and exercise on. If I did it, everybody else can do it to get in shape.”

Alabama State University partnered with the Alabama Health and Recreation Department, the Governor’s Commission on Physical Fitness, the Alabama Sports Festival and the Mid-South Resource Conservation and Development Council for the initiative.