Carrie Elizabeth Gautreau and Robert Christopher Wolfe, of Birmingham, Alabama were married in a 5 o’clock ceremony at Mathew’s Manor in Springville, Alabama on May 8, 2010. Pastor Steve Blair from Church of the Highlands officiated.

The bridegroom is the son of Barbara Wolfe of Troy, Alabama and Robert and Patty Wolfe of Jacksonville, Florida. He is the grandson of Cebie Thompson and the late Joseph Thompson of Selma, Alabama and Tim and Betty Cantrell of Virginia Beach, Virginia. 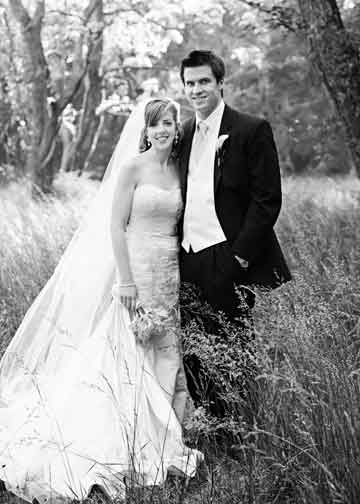 The bride looked stunning in a chic but romantic ivory silk satin and lace gown designed by Tamara Kristen for the Marisa Collection. The elegant modified mermaid gown featured a scoop neckline and asymmetrical hem. Her gown had delicate beaded allencon lace trailing down the bodice onto the sumptuous skirt. Covered buttons detailed the scoop back of her gown which swept into a semi-cathedral train. An ivory cathedral veil completed the look. The bride carried a bouquet of ivory calla lilies and a handkerchief from her late great-great aunt and namesake, Carrie Cox.

Presented in marriage by her father, the bride was attended by her sister as maid of honor, Christen Gautreau. Bridesmaids were Samantha Wolfe Earnest, sister of the groom, Amy Leigh Bamberg, Kim Sanders and Amy Sullivan.

A reception followed at Grace Hall.

The bride is a graduate of Mississippi College, Clinton, Mississippi, Southern College of Optometry, Memphis, Tennessee and the University of Alabama at Birmingham Residency Program. She is currently an Optometrist with Eye Care Associates.

The groom is a graduate of Morgan Academy, Selma, Alabama and Auburn University. He is currently employed as an Assistant Project Manager with David Acton Building Corporation. A former member of Fairview Baptist Church, Selma, Alabama, he is currently enrolled at Church of the Highlands Leadership Institute and is pursuing a degree in Pastoral Ministries.

After a wedding trip to Hawaii, the couple now resides in Moody, Alabama.