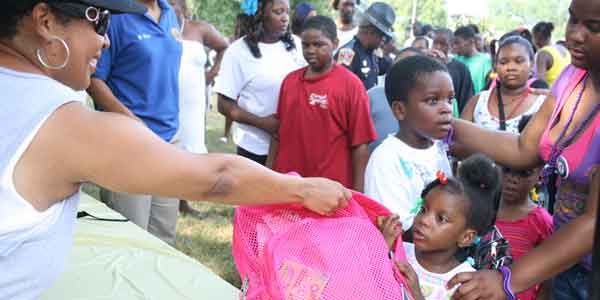 Emanuel Jones, 9, felt like it was never going to be his turn. But the five-minute wait was worth it. Now he has new school supplies for the year, which will make school more exciting for him.

“I’m thinking I’ll have fun with it all,” Emanuel said.

Students and parents waited anxiously at the park area next to Clark Elementary as members of the Selma Police Department, Selma Fire Department and Alabama State Troopers presented children with plastic or mesh backpacks filled with school supplies at the second annual Police Assisting with School Supplies program.

Officers collected $1,500 to purchase supplies to fill 150 backpacks for pre-kindergarten through fifth-grade students and 200 plastic bags with supplies for sixth-though 12th-grade students.

“This is going to help a lot,” said Fredrika Willoughby, a parent of two children.

Willoughby appreciates the new supplies because it will save her money, but she will not come back again unless she needs the financial assistance.

“We’re going to come back if I need this help again,” Willoughby said. “As far as if I don’t, no, I’ll let someone else have a turn to get it.”

Last year, officers presented the items to the Selma City Schools Central Office to be divided among the schools, but this year chose to make it a community event.

“We wanted to have the children themselves be a part of it and make it a festival,” said Miah Tolbert, judicial correction services officer manager.

Busy parents, such as Miriam Cook, don’t always have time to buy supplies, so this event relieved her from shopping.

“Sometimes parents work a lot and last minute grabs are impossible sometimes,” Cook said. “So, it was great because I’m a parent and I work a lot, and I haven’t gotten school supplies yet.”

The Dallas County School system and seven of 13 schools did not meet the Alabama Yearly Progress report, AYP, but... read more