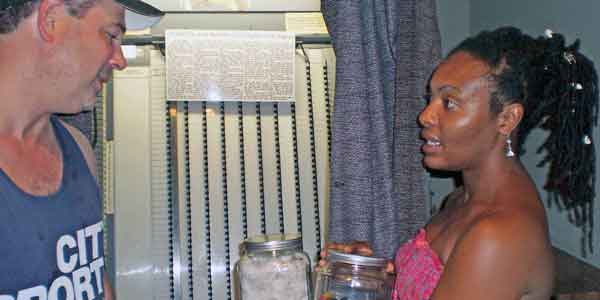 Olimatta Taal, National Voting Rights Museum & Institute's interim director, demonstrates to Fred Gordon of Columbus, Ga., voting tests administered to African-Americans prior to 1965, Tuesday during a tour of the museum. They are standing in front of a mock polling place from the time.--Desiree Taylor photo

SELMA — Four-and-a-half decades doesn’t seem that long ago in the course of history, but here it’s something to mark.

On Friday, The National Voting Rights Museum and Institute will celebrate 45 years of African-Americans gaining the right to vote.

Community leaders, government officials, special guests and local choirs will gather at the Edmund Pettus Bridge on to commemorate this historical moment.

Olimatta Taal, interim executive director of the Institute, said the people of Selma “love gospel music” and she expects the event to bring a lot of people.

“We’re expecting people to come out in numbers to the event,” she said. “We just want the people of Selma to come out and support. We want to preserve the Civil Rights Act and the voting movement. Our doors are open to everyone.”

Many churches and young people collaborated in their efforts to help win African-Americans the right to vote. The voting rights act was signed into law by President Lyndon B. Johnson on Aug. 6, 1965.

Mayor George Evans wants Selma residents to remember the cause.

“This celebration is very significant,” Evans said. “People lost their lives and sacrificed for our right to vote and I hope people can realize the true meaning of that. People should use their right to vote because it’s valuable.”

“It’s not about that new hairdo or those new pair of Jordans,” she said. “It’s about young people coming out and understanding that they can make a difference too.”

Choirs from The Selma Community Church, Ebenezer Baptist Church, The Movement Church; Mayor George Evans; Dexter Wimbish, general counsel for the Southern Christian Leadership Conference; Bernard Lafayette, head of the Center for Nonviolence and Peace Studies at the University of Rhode Island;  and C.T. Vivian, a minister and veteran of the Selma movement, will make guest appearances.