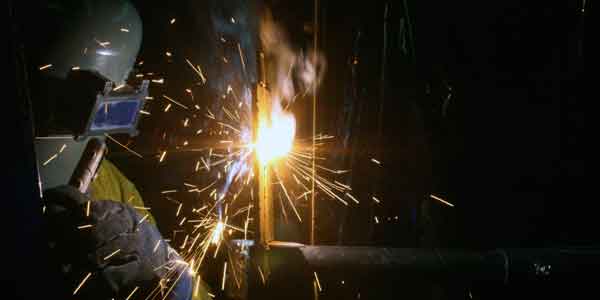 Roger Johnson splits a piece of steel in the welding class for adults at Wilcox Central High School on Monday. The classes are designed to give people skills so they can find jobs.--Laura Fenton photo

CAMDEN — After training for 10 weeks, Caleb Irving will change his fate.

Irving has been unemployed for two years, providing for himself and his two children by working odd jobs in construction.

“I was doing anything to get by,” Irving said. “It’s been really hard trying to find a job.”

Irving will worry no more, thanks to the free welding program offered at Wilcox Central High School.

He and the 41 other unemployed adult participants are guaranteed a position as an apprentice with a local company once the day and evening programs conclude in August and September, respectively.

Companies such as Lavender Industries in Aliceville, Rayco Industries Inc. in Selma or Rock-Tenn Company in Demopolis will likely fill open positons with the program’s participants.

Talton said the 24 percent unemployment rate of Wilcox County is unreasonable, and he decided to find a way to change this.

“The work is here and the economy is here,” Talton. “We have the workers, but we just don’t have the training.”

He planned to offer welding training for some of the unemployed people in the area, but couldn’t do it alone.

“It’s a great program from what I can see and it does a lot for the community,” said Doug Sanders, Wallace Community College community outreach coordinator,

With the help from Rayco, Talton offers free work boots and uniforms to students.

“Without the money, the school can only do so much,” said Hunter Harrelson, business development manager for Rayco.

In return for helping the program, Talton will recommend students to Rayco.

“Give us your best and brightest and we’ll hire them,” Harrelson said.

Students learned how to measure properly, cut metal and use equiptment, which is enough information for them to pass entry-level testing to begin work at a factory.

“When they finish this course, they will have the skill to go to a company and become certified,” said Jim Emerson, program coordinator.

Students used the building at Wilcox Central High School, renovated this year through a $300,000 grant from the Alabama Office of Workforce Development.

People who participate in Talton’s program won’t get a certificate as a welder, but they’ll have the experience needed to kick-start careers in the occupation.

Irving is thankful he decided to apply for the program and encourages others to do the same.

“It gave me a new lease on life,” Irving said. “I was looking for a job, and I got into this class and all that changed. I’ll have a trade that will always be around.”

Salary for apprentice positions range from $12 an hour to $24 an hour.

Day classes meet Monday through Thursday from 7 a.m. until 3 p.m. Evening classes meet Tuesdays and Thursdays from 4 p.m. until 9 p.m.

New classes will begin at the end of September. For applications or information, contact Talton at 296-7429.

Non-profits could lose their tax-exempt status

WASHINGTON — At least 55 nonprofit organizations with Selma address are at risk of losing their tax-exempt status because they... read more