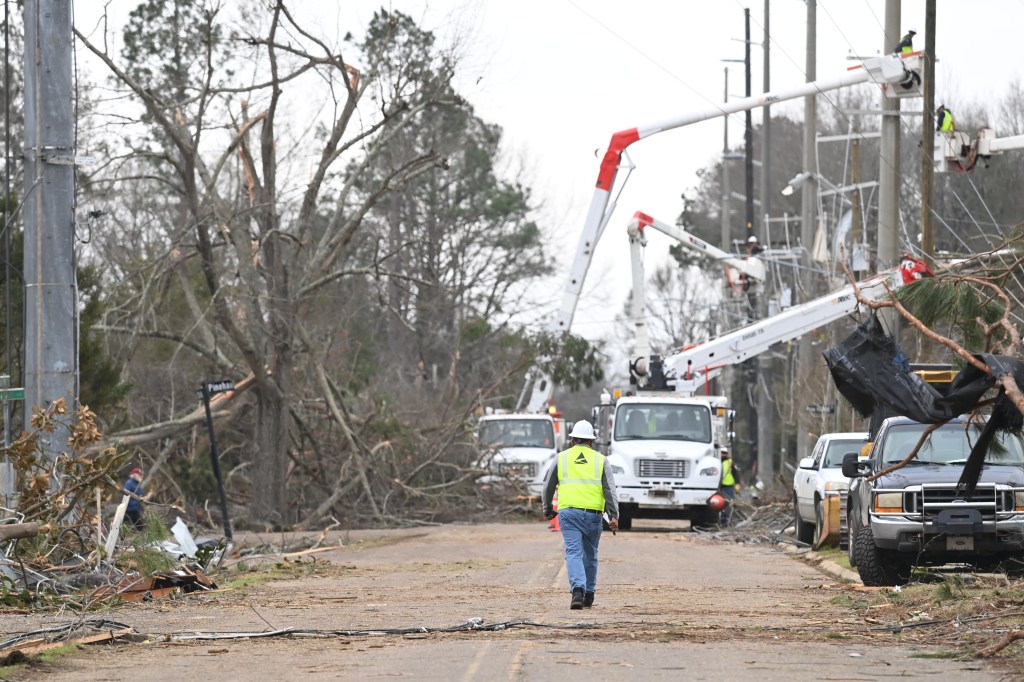 While many in the community impacted by the Jan. 12 tornado were still trying to make sense of what had just happened in their neighborhood and city, the people at Alabama Power and Pioneer Electric Cooperative were already formulating plans and putting boots on the ground in Selma and Dallas County help get the community-powered back up.

“The tornado came through and we kind of ran in circles for a little bit trying to wrap our heads around what just happened,” Distribution Specialist for Alabama Power Reid Buster said. “After that the next step was to formulate a plan of action.”

Management at Alabama Power quickly put that plan into action and got crews out and working in different areas. One crew was sent to Old Orrville Road and Kelsey Tripp, lead linemen on the line crew for Alabama Power, was part of that crew. Old Orrville Road, which was one of the first, and worst, areas hit by the tornado, was littered with downed trees, power lines and poles.

“That was what a lot of the holdup was,” Tripp said. “They were trying to make a way for us to get through Old Orrville because trees were everywhere. Once they got a path in there for us to get in, we still had a little hiccup. We had to wait to try to get traffic to let us through.”

The first night, while the crews were out working the devastation of the tornado, Buster and members of his team shifted gears and focused on trying to help the people who’d just been through what was very likely the most extreme situation they’d faced in their lives.

“The neighborhood we were working in, we went door to door just really asking if people were ok,” Buster said. “Asked if they needed stuff. I mean there were complete blocks that were destroyed.”

Alabama Power used 1,300 workers who each worked a total of 120 hours from Thursday to Monday according to Area Manager for Alabama Power’s Southern Division Mike Jordan.

That stretch was not only hard on the workers, but their families, too.

In addition to the support of family and friends, the people of Selma helped lift the spirits of workers as they worked to tackle what seemed like an insurmountable task at the time.

“This community came together in a way I’ve never seen anywhere,” Buster said. “So many people were willing to help out there with their personal tractors pushing lanes for us to get through the streets so we could do the work we needed to do, so really this was a group effort on the community and power companies. Everybody came together.”

While most of the damage occurred in Selma, Dallas County, which is served by Pioneer Electric Cooperative, was not spared as the tornado made its approach to the city.

“The damage we sustained was mostly in the area of Beloit,” Communications Director for Pioneer Electric Cooperative Christi Scruggs said. “We had broken poles. We drove through there and we had lines laying on the ground and there were no poles.”

Some areas in Beloit are relatively swampy, and the wet conditions created some challenges for crews who started to put up new poles and lines, but once they were able to get through all the obstacles the team was able to get power back to the community quickly.

“Our crews worked around the clock from Thursday to Sunday and got everyone back on who is capable of receiving power,” Scruggs said.