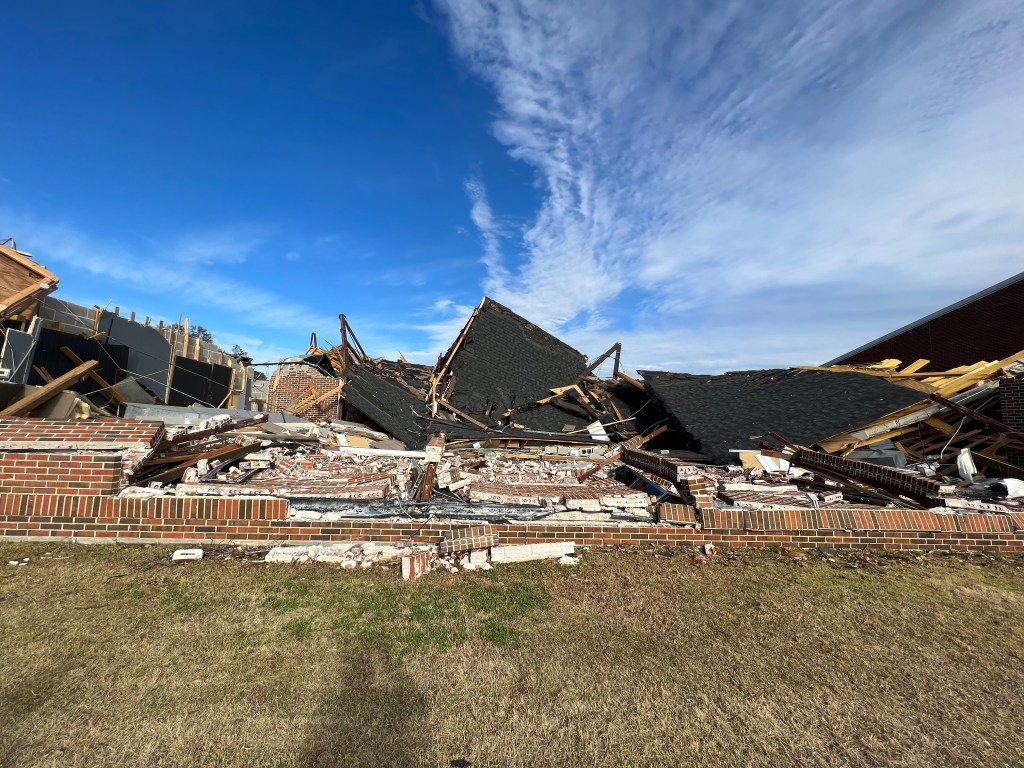 Churches across the city of Selma were devastated last Thursday when the EF-2 tornado came through the city that caused massive destruction. One of the churches that received significant was Crosspoint Christian Church. The church houses a preschool on the campus. While school was going on, the lives of the 84 people in the building changed drastically.

“That morning, I knew that bad weather was coming through,” Crosspoint Preschool Director Sharon Reid said. “I always keep an eye on it. A lot of our parents are teachers. So, I always reach out to them. We actually downloaded the weather app on a couple of our classroom tablets. Me and another teacher were keeping an eye on it. And so far, none of the schools had shut down. The teachers said they were watching it at the other schools and that they would keep me updated.”

The day progressed normally as the younger kids ate their lunches with the storm on the way to the area.

“Right before 11, the weather alarm started going off,” Reid said. “We were watching them and we finished up our lunch, cleaned up and I had gotten mine (students) in my classroom bathroom. It’s a k-4 and a k-3 and we share that bathroom. I had my cook come in there with me, we got them settled and then told the teachers to the get in the hallway. The weather screen was lit up.”
The teachers and kids reached the hallway and got ready for the storm, but the severity changed.
“As we were in the bathrooms and the hallways,” Reid said. “I had a parent contact me and say a tornado has hit or touchdowned in Orrville and Stanton and coming straight down Highway 22 coming right for you. When I seen that, I came out of my bathroom, I told the cook do not come out of this room and I got all the teachers in the other bathrooms and the nursery workers decided to come over to our building. So, I told them to get into the office or the other bathroom on that hallway.”
With tornado barreling down towards Crosspoint, Reid and the other teachers worked hard to make sure the kids stayed calm and remained safe.
“I’m in my bathroom and I’m sitting there talking to my kids and telling them that we are going to have bad weather, do as I ask you to do, keep all eyes on me and I will get you through this,” Reid said. “I said, God is here with us and I love you.”
At that point, the tornado hit.
“So, we are sitting there and all of a sudden, we’re hearing it,” Reid said. “And I guess that’s when it hit and it was getting pretty rough so I told my class lay down, close your eyes as if you are fixing to go to nap. Then it hit hard about that time and they all were under their covers and I am sitting right there with them and I watching the ceiling come apart above me. All of a sudden it sounded like the walls were being ripped apart, stuff was flying and I laid down on top of my class and while I am laying there, stuff started flying into that bathroom on top of me.”
Reid said she does not know how long the storm lasted and her main focus was her class and their safety.
“We ended up in our little nap room in the hallway and I could smell the gas,” Reid said. “About that time, people were coming from everywhere and they got us out of that room and put us in the field.
“Then the rain started coming and parents started coming and we ended up in the church sanctuary for about 35-40 minutes. Someone came through and said they smelt gas and we had to get out of the building.”
Reid and the teachers took the kids to Fairview Baptist Church until parentscould arrived to get their children.
Crosspoint Christian Church Pastor David Nichols said when his congregation met together on Sunday, it was a time to honor those preschool workers and thanking God that no one was seriously hurt.
“We made the whole service about honoring these ladies for what they did,” Nichols said. “They are the heroes. There is no doubt about it. If they wouldn’t have acted swiftly and fastly like they did, we might be having a whole different story right now. So we honored them and honored God. Just honoring God for showing us grace in the storm, showing us mercy because it could have been a whole lot worse.”