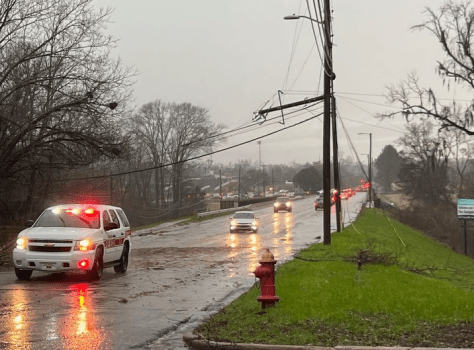 A strong tornado that tore through Selma has left thousands in the dark with
power poles and power lines down across the city.
A strong tornado struck Selma around noon Thursday, leaving much of west
Selma and the city’s historic district in shambles, with massive trees uprooted or
snapped off, homes and businesses damaged.
As of 7:30 p.m., Alabama Power’s online outage map showed 3,032 homes and
businesses without power in west Selma; 329 without power in east Selma, and
more than 1,200 without power in Valley Grande. The outage map is also
showing power loss across Dallas County, including more than 1,100 in the
Orrville area, west of Selma, among other areas of the city and county.
Alabama Power has crews working to restore power, but faces a daunting task
with so much damage to the power infrastructure in the city.
“First, the damage caused by this afternoon’s tornado is heartbreaking,” said
Mike Jordan, Area Manager of Alabama Power’s Southern Division.  “We are
part of the Selma community and our thoughts are with all of those who were
affected. The damage to the electric infrastructure is also severe with initial
reports of multiple broken poles, damaged transformers, and fallen wire.  At this
time, approximately 10,700 Alabama Power customers are without service in the
Selma area.  Work is ongoing to assess damage and begin the process of
restoring electricity.  Throughout tonight and tomorrow, additional personnel will
be arriving in the area to assist with that power restoration effort.”