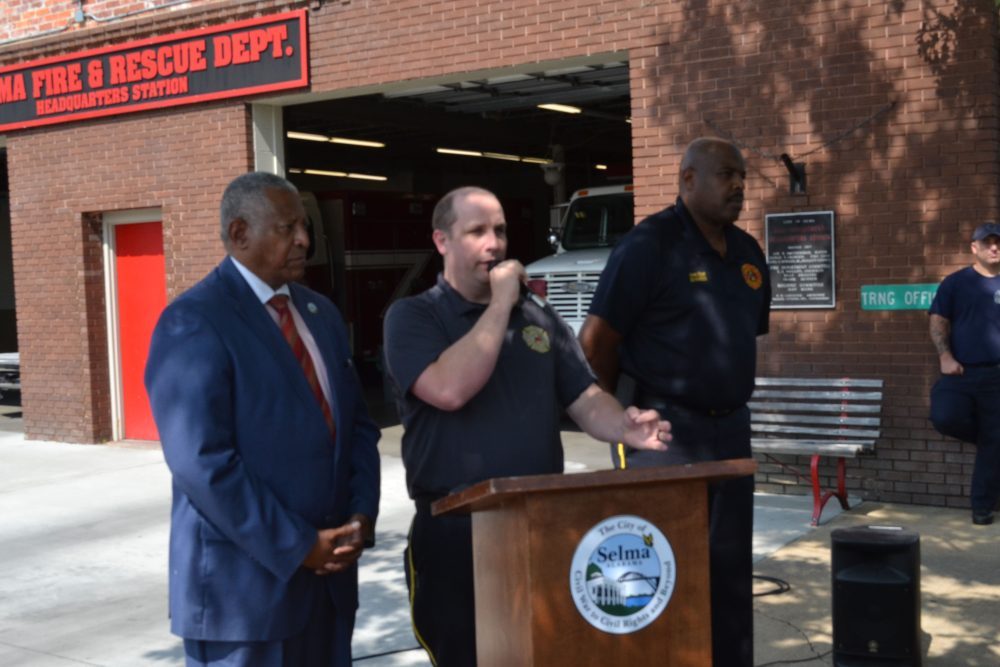 Perkins Jr. named Capt. Franklin Edwards as interim fire chief on May 10 to replace Willie Mason Jr., who resigned the day prior with less than three months on the job. The City Council named Dailey as fire chief during the council’s meeting later that evening.

Dailey said less than four days into his work, he found instances of ‘false narratives, false claims and some issues that need to be worked out within the department,” issues Dailey said he did not support.

“I stated when I went in for the chief position that I would not jeopardize myself for morality reasons, and I believe honesty is your best policy,” Dailey said.

“Some things that were done that I cannot support because I find them to be inconsistent to the way we operate as a department. With that being said, I have notified the mayor as well as assistant chief Edwards that I would not be able to accept this position as chief.”

Perkins said he spoke with both Edwards and Dailey prior to initially appointing them as interim fire chief and interim assistant fire chief, respectively, and added he chose Edwards to serve as the interim chief based on his experience level.

“What the council did was went forward without any conversation at all with the mayor, without any discussion at all – even with Capt. Dailey, and voted to appoint him as chief,” Perkins said. “According to Capt. Dailey, that happened without a conversation with him … The council moved forward. They’ve done this three times with this department, and they have literally set this department on fire.”

Edwards, who has filled various leadership positions within the department when there hasn’t been a chief, said the department has struggled for years with retention.

He added the council also pushed back when it came to approving raises for firefighters.

“We asked the council to give us a pay raise,” he said. “We cut own our budget to reflect the pay raise. In other words, we took money from other line items to make sure we had enough money to pay our guys the raise that we were asking for. Councilman (Clay) Carmichael said we can’t pay these guys this because we’ll be paying out more than we pay the police department, but you’re so concerned about our fire department right now.”

Edwards said all involved in the process need to work together in order to get on track.

“City of Selma, until we do things right, we’re going to continue going down the wrong path,” Edwards said. “The path seems to be that the council doesn’t want to work with the mayor, and the council doesn’t want to work with people presenting the facts and the truth. Anything that I’ve said, I can back it up with paperwork. I hope we’ll have a further discussion about it in the future.”

Perkins said the council told him he wasn’t allowed to be involved with the interview process when Mason was hired. Perkins added the council used a committee consisting of four public safety leaders and one council member.

“When you look at the data of the rubric, the scoring criteria that they used to evaluate the interview process and you look at only the four public safety leaders that were on that committee, the order of the selection would have been Edwards, Mason and Dailey – in that order,” Perkins said. “When you add the non-public safety person who took the rubrics, took up all the data, held it for over a month unsecured, and you look at the data then, her scores skewed the outcome. Her margins were 20-21 points different than any of the other scores. You figure that out.”

Edwards acknowledged he’s been on the receiving end of personal attacks made regarding his indictment in Jefferson County for leaving the scene of an accident on Interstate 59 where a Pineville, Louisiana resident Matthew Scott Sartin died on June 27, 2020.  Edwards is scheduled to attend a pretrial hearing on June 16 at 9 a.m. in the Jefferson County Bessemer Courthouse.

“I don’t care who you are, if you’re not God, then you can’t judge me,” Edwards said. “Now I had an accident, and I lay claims to that I was involved in an accident, but until the Constitution is changed, I think I’m innocent until proven guilty because not one person has heard anything different because it hasn’t been put out there … I accept the criticism of even being involved in an accident, something that I couldn’t prevent, but you shouldn’t blame or hold me guilty until I’ve been proven that way.”

“I’m not surprised by the emotional press conference, as it’s unfortunately become the norm,” Carmichael said. “I’d prefer not to fight publicly and will refrain from calling names. I will say that I did not mean for that statement in last week’s paper to be directed at any particular person. I apologize for saying it.”

Carmichael, however, points out that the city council is following the correct procedure.

“It should be noted that the council is following the code of Alabama title 11-43-5 when it comes to appointment powers, and our local ordinance was upheld in a Supreme Court case under the last administration,” Carmichael said. Selma City Councilman Clay Carmichael reacted to the press conference.

“I’m not surprised by the emotional press conference, as it’s unfortunately become the norm,” Carmichael said. “I’d prefer not to fight publicly and will refrain from calling names. I will say that I did not mean for that statement in last week’s paper to be directed at any particular person. I apologize for saying it.”