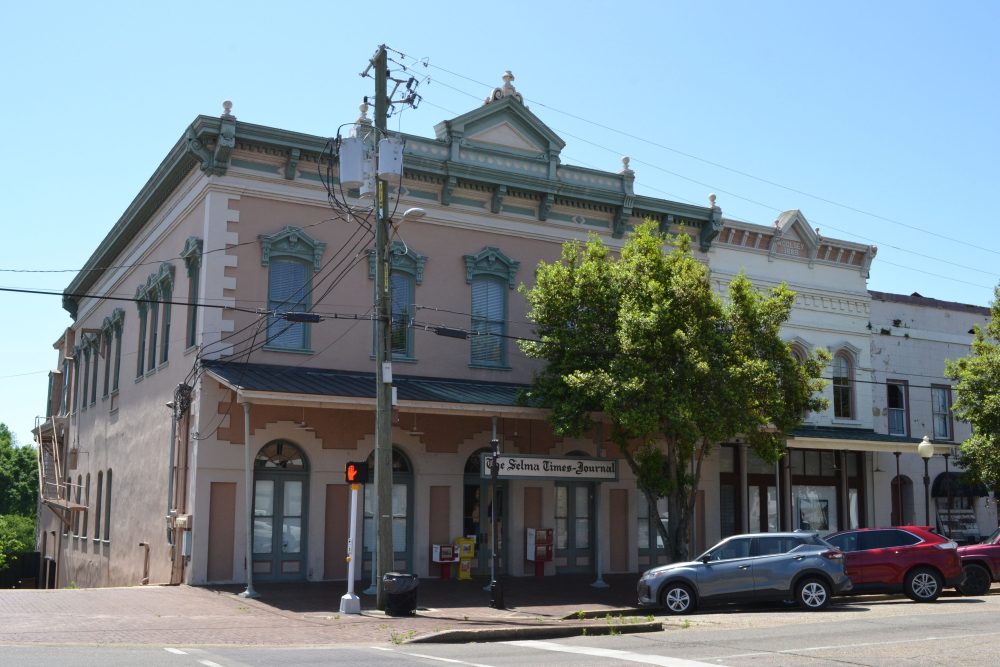 The historic buildings and real estate that house The Selma Times-Journal in downtown Selma have been sold by Selma Newspapers, Inc., publisher of the newspaper, Selma The Magazine, and affiliated websites and social media platforms. Times-Journal President-Publisher Dennis Palmer said the newspaper will continue to operate from the 2nd floor of its current location and lease from the new owner.

HeyDay Holdings, LLC, of Bainbridge Island, Washington is the buyer. The buildings and real estate are located at the foot of the historic Edmund Pettus Bridge. They are 1014, 1016, and 1018 Water Ave, and encompass 15,570 square feet, were built in 1870.

“We are fortunate to have a lease agreement with the new owners that allows us to stay in our current location. We believe that will better serve our readers and the community in coming years. The Times-Journal and its predecessors have spent nearly 200 years in the downtown area,” Palmer said. “Most of our publishing operations will center on the second floor of the main building. But we will have a staff member located on the first floor to serve customers.

The sale is of real estate, only. Selma Newspapers, Inc. continues as owner of all publishing entities and operations. Palmer said sale of the real estate follows a common evolution for publishers nationwide. As The Times-Journal continues to grow digitally and serve readers and advertisers in new ways, there is a corresponding reduction in need for floorspace.

“I look forward to what the new owners have planned for the buildings. After getting to know them over the past few months, I feel that we are making a good move for the future of these buildings, the study of important events and opportunities in Selma” Palmer said

The building’s new owners, Steve Romein and Ty Cramer, see an investment in Selma as way to assist an organization they are involved with, Common Power, meet its goals and objectives, especially in the area of voter rights and voter education.

“Originally in the ‘2000 teens’ we started to read so much about the United States and how it started and there became a real passion about voting and voting rights and what’s happened throughout the history of the United States,” Romein said. “In  2017 we did a tour with Nation Magazine that included Selma, Montgomery, Birmingham, Memphis, Jackson, and Little Rock, and it was eyes wide open about history.

Then when Common Power was starting up they were focused on voting rights and we became early on supporters of Common Power and it’s been quite a journey the last four years.

Romein said Common Power’s focus on voter education motivated them to help the organization establish a location in the South they could base from, and saw Selma as the logical choice.

“Education had become a big part of the foundation of the organization and it became apparent to us we needed an arm focused on education, so we’re focusing on a separate institute focused on education because it’s such a big motivator to young people and old people, and we’re just fortunate we can help them facilitate that.”

For her, Cramer said the investment in Common Power, and in Selma, was how they were an actionable organization focused on lifelong learning.

“There’s a component to Common Power that is super inclusive,” Cramer said. “The motivating piece of this was the lifelong learning, and learning to motivate for action and [Common Power] was doing it, and they were growing. So we knew it was an organization we wanted to be a part of and then it became apparent there was an opportunity for us to donate toward them achieving their goals.”

Common Power Executive Director Charles Douglas, III, says the organization he represents stands on the shoulders of the voting rights pioneers who spent tireless hours fighting for voter equality, but there is still much left to be done.

“Common Power believes the most common power we all should have is the power to vote. We also know there’s no quick fix to that,” Douglas said. “We didn’t invent this fight. We’re jumping into the stream that has been flowing for many decades and lifetimes of people fighting for this specific right, so they could have a voice in all the other things that happen in their lives, and Selma is at the center of much of that history. While we understand we are a version of the struggle today, we owe everything to the people who did this before us, and we know it needs to extend beyond us.”