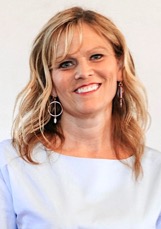 Dr. Jennifer Williamson Stone, was born to Dr. and Mrs. Cecil Williamson in Selma, Alabama on October 22, 1973 and passed away at her home in Opelika, on September 2, 2021 after a lengthy battle with cancer. She was 47 years old.

After graduating from Morgan Academy in Selma, Jennifer came to Auburn in 1992 as an undergraduate Math major. She remained in Auburn for graduate studies completing her masters and PhD in Topology. She returned as a lecturer in 2013 and was promoted to senior lecturer in 2019. She was later appointed as GTA director and course supervisor for the department.

Jennifer’s impact on the department’s instructional programs was enormous and resulted in her winning Auburn University’s Alumni Undergraduate Teaching Excellence Award in 2020, which will now be known as the Dr. Jennifer Stone Award for Excellence in Teaching in her honor.

Prior to returning to Auburn University, she taught Math at Lee-Scott Academy from 2008-2013. She touched the lives of hundreds of students while teaching Algebra 2, Pre-calculus, and ACT Math prep courses.

Being a “Distinguished Young Women” (DYW) award recipient, Jennifer loved to support the DYW program in Lee County. She enjoyed her years as the Lee County DYW chairperson, helping young women to “Be Their Best Selves!” The “Dr. Jennifer Stone Be Your Best Self” essay award is given in her honor.

A private graveside service with her family will be held Sunday, September 5, 2021. All are welcome to join in a celebration of life ceremony at her home church, Trinity Presbyterian Church, on September 12, 2021 at 2 p.m.