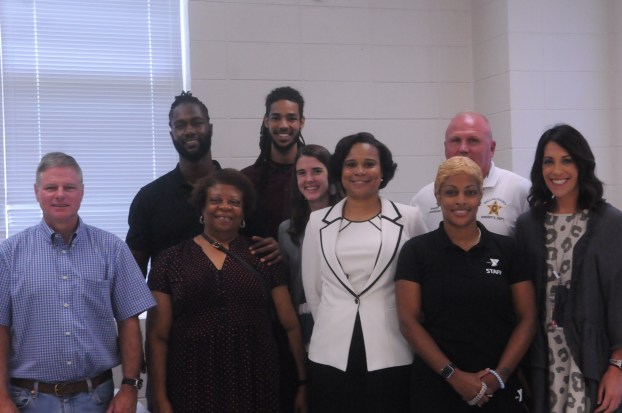 The Dallas County Court Services held its annual back to school giveaway on Wednesday at the Selma-Dallas County YMCA.

The event was held for kids grades kindergarten through 12 who went though the program. The kids received book bags.

“We’ve helped a lot of people get in the right direction,” Armstrong said.

“People think that the Dallas County Sheriff Office is all about locking people up,” Granthum said.

“We do put people in jail, but not everyone belongs in jail. You have to be held accountable for your actions. If you complete the program, you won’t be in jail. There are good people, but some people make bad decisions. Hats off to the families and kids who want to do better.”

Johnson, who played 10 NFL seasons, said he’s honored to give back to the area. “I believe in Selma and the people,” Johnson said. “I’m thankful to be here and help the city.”

Members of the Dallas County Court System and Alabama DHR were also on hand.

The Dallas Court Services exists to aid and monitor individuals who have slipped up with criminal behavior related to drugs, alcohol or other factors, including peer support, screening collections, substance abuse aid and prevention, child care, transportation, family court services.