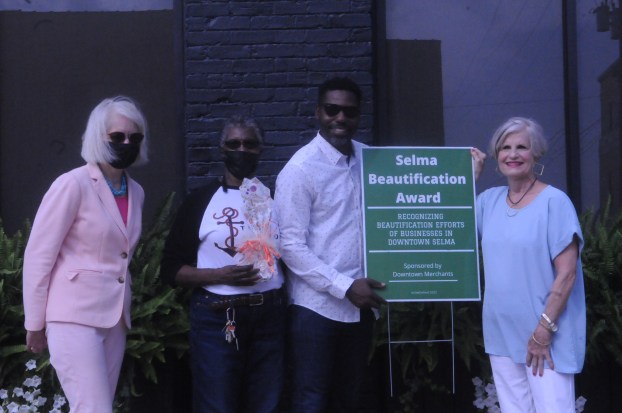 A newly formed group of downtown merchants have come together to establish a bi-monthly award given to a downtown merchant that goes above and beyond with beautifying the exterior of their business.

The group, led by Look owner Ann Murray, presented the inaugural award to The Anchor Selma, which is owned by Selma native Aaron Roper, who returned to Selma to start the business last year.

The Anchor Selma, located at 15 Franklin Street in downtown Selma, is an event space that, according to its Facebook page, consists of “two floors of premier space, picturesque backdrops, a meal prep area, high ceilings, and adaptable lighting and color schemes.”

Roper said he was inspired to start The Anchor as a way to enable people coming together and having fun.

“I see all the people who want to come to Selma, and this facilitates a space where my friends can come, or where people can come to have party, or a reunion, and it gives me the opportunity to be a part of that,” Roper said. It’s brought nothing but smiles.”

The Anchor had a soft opening in September 2020 with a wedding and a reception, but has seen business pick up since the first of this year, in spite of Covid.

“With Covid, people still wanted to have small gatherings, and the space allowed people to have gatherings of 20 or 30, because the space is large enough for them to be able to social distance, spread out, and break bread with their families.”

In presenting the award to Roper, Murray said The Anchor was the perfect choice for the first award.

“Aaron has done such a beautiful job with this building, and its such an encouragement to the whole downtown,” she said. “We want to encourage the effort of business owners downtown to beautify their storefronts, because it makes such a difference, not just for tourists, but for the whole community.”

Murray said the award would be presented bi-monthly, which gives businesses ample time to show off the designation.

Sheryl Smedley, Executive Director of the Selma and Dallas County Chamber of Commerce and Tourism Information Center said she hopes the award is a catalyst for other downtown merchants to follow in the footsteps of The Anchor.

“The Chamber of Commerce is always delighted that citizens and business owners take a leadership role in beautifying their businesses, homes, and our historic city,” Smedley said. “With many businesses, especially in our downtown, a simple coat of paint, a little litter removal and some additional plants could do wonders.

“As you are aware COVID-19 hit Selma and Dallas County residents and businesses hard, so a simple “low hanging fruit” approach would be perfect. The Chamber and it’s board of directors would like to say thank you to all the volunteers that have worked over the last couple of years to pick up garbage, prune bushes, and more to help keep our downtown vibrant and welcoming.”

Roper said he was surprised and humbled to receive the recognition for his business.

“I’m really excited to receive the award, because this is not what I set out to do,” he said. “I set out to bring people I don’t know together, and then all of the sudden things were getting noticed outside the building. So with that, I noticed people began to show up and take pictures throughout the day. I’m very excited because I didn’t come here to make an impact, but through community service and little works, the impact has been huge and has been noticed all the way across. I’m really elated to have received this award.”

Those interested in finding out more information about renting event space at The Anchor should Google The Anchor Selma, where they’ll find links to contact information, or they can call (334) 526-0043. For more information on the beautification award, contact Murray at (334) 505-7002.

Beyond the Bridge Freedom festival will be held on Saturday

The Beyond the Bridge Freedom Festival will be held this weekend. The event starts  at 10 a.m. Saturday and ends... read more