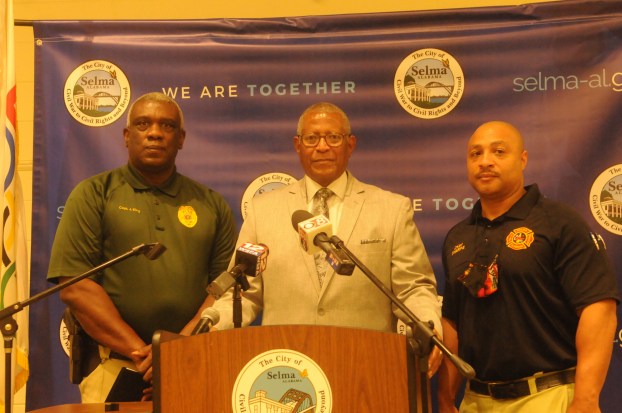 The City of Selma announced the schedule for the Fourth of July holiday event.

A fireworks show, grand opening of the riverfront splash pad , concert and parade are among the activities scheduled for Sunday, starting at 4 p.m. at Riverfront Park.

“I’m excited that we’re back, the city of Selma is back,” Perkins said. “For Selma, Dallas County and the surrounding community, we’re all in this together.”

The Chamber of Commerce is sponsoring the parade and will be giving out free flags.

City officials wanted to remind residents that social distancing should be practiced at the event. Wearing a mask is required.

Elizabeth Rutledge, Director of Personnel Department and COVID Czar,  said that only 38 percent of Dallas County has been vaccinated, as of Monday.

Perkins said that the coronavirus is a tough spot for him.

“ It’s been a challenge for me as Mayor,” Perkins said. “I’m convinced whatever decision you make on COVID is wrong for someone. There are no right decisions.”

The Stars and Stripes honor parade opens the event at 4 p.m., honoring first responders, emergency personnel, teachers and medical professionals in a partnership with the Selma-Dallas County Chamber of Commerce.

A ribbon cutting for the Splash Pad Grand Opening will be held at 5 p.m. by city Officials. Perkins said that former Selma Mayors Darrio Melton and George Evans are invited to participate.

Music will start at 5 p.m., followed by a bicentennial concert at 6 p.m. to honor the 200 year history of Selma.

The Army National guard will host an event with  a rock wall and gladiator pit among their events.

A fireworks show will be held later in the evening.

The event will have one access point for citizens to enter the park at the Green Street Main entrance.