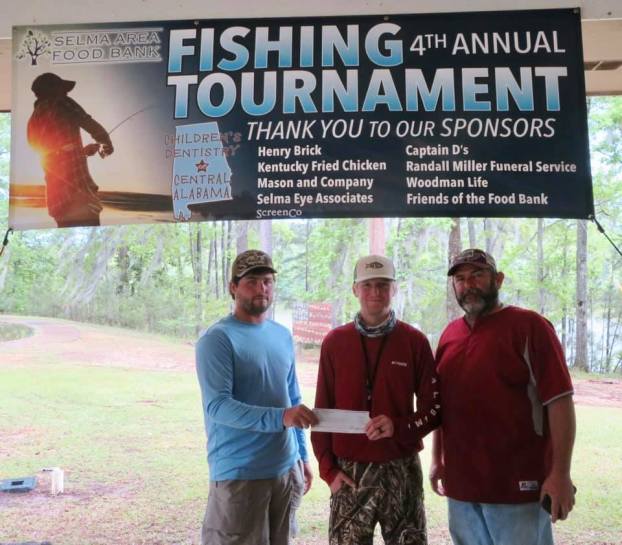 The team of Cory Ingram and Wil Tipton of Selma took first place with a total of 15.2 pounds. Jeremiah Armstrong and Jacob Armstrong, both of Camden, was second with a total of 14.2 pounds. Chris Kitzinger won the big fish award with a catch of 4.7 pounds.

SAFB Executive Director Jeff Harrison said 25 boats registered for the tournament, but 22 competed because of the extreme weather.

Harrison said he was pleased with the tournament’s turnout in Wilcox County.

“The foodbank has a loyal following of fisherman who have fished with us for the last five years,” Harrison said. “This event helps raise awareness and funds in our four-county service area of Dallas, Perry, Marengo, and Wilcox counties.

“Our title sponsor this year was Children’s dentistry of Central Alabama and other local businesses who have been loyal supporters of the food bank and its mission to raise awareness of food insecurity,” Harrison said. “The food bank relies on private donation to maintain its’ existence and purpose. Although the numbers were down a bit from previous years the tournament was a success.”

Southside High guard Chris Thomas will play in the All-State basketball game this summer. The junior was the only Dallas... read more