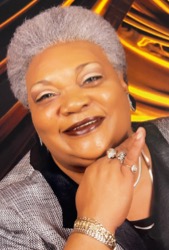 Patricia was a 1969 graduate of RB Hudson High School. She served in the United States Air Force and later received a Cosmetology degree from Wallace Community College Selma.

She became the second Woman Firefighter of Selma Alabama and later became the Co-owner of New Shapes Styling Salon until the passing of her husband where she then became the co-owner of Lewis Brothers Funeral Home where she served the families of Selma, Dallas County and surrounding areas for many years.

Patricia received her heavenly wings and departed this life on Thursday, April 22, 2021 surrounded by her loving family. She was preceded in death by her husband James E. Tolbert Jr., her father Ben Cole and her mother Marion Cole.

A graveside celebration of life has been scheduled for Saturday, May 1, 2021 at 11 a.m. from the Pineview Memory Gardens with Pastor Davon Simpson, officiating.  There will be public viewing on Friday, April 30, 2021 from 1-6 p.m. at Second Baptist Missionary Baptist Church with Lewis Brothers Funeral Home serving with excellence through professional service.