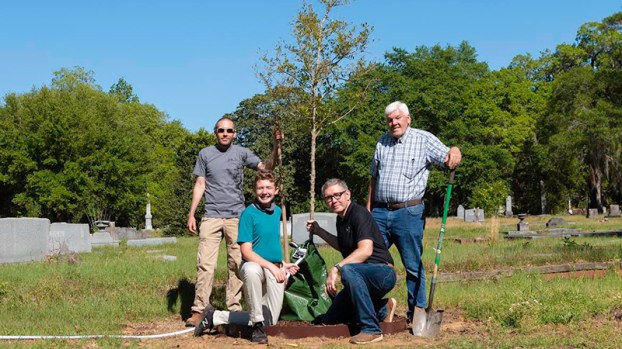 The trees were procured with the help of the ALA-TOM RC&D Council’s Urban Forestry Program as a way to combat the effect of some of the cemeteries ancient trees dying – according to a CPG press release, estimates put the largest trees there at 142 years old, as arranged by Nathaniel Henry Rhoades Dawson in 1879.

“Given their great age, Alabama’s proclivity for stormy weather and the general wear and tear of city life, many of Live Oak Cemetery’s stately old trees have passed on,” a CPG press release stated. “This planting of young trees will ensure the site retains the character Mr. Dawson intended and the City of Selma’s citizens expect.”

The organization has additional plans for other cemeteries across Selma throughout the year, with plans to plant trees in Lorenzo Harrison Memorial Gardens and New Live Oak Cemetery, as well as plans to install additional shrubs in all thee of the city’s historic cemeteries.

The CPG, a Selma-based nonprofit run by volunteers, has over the last two years cleaned and restored more than 200 grave markers across Selma’s historic cemeteries and utilizes the assistance of an archaeologist when needed.

For more information on the organization or to get involved or make a donation, visit cpgllc.org.