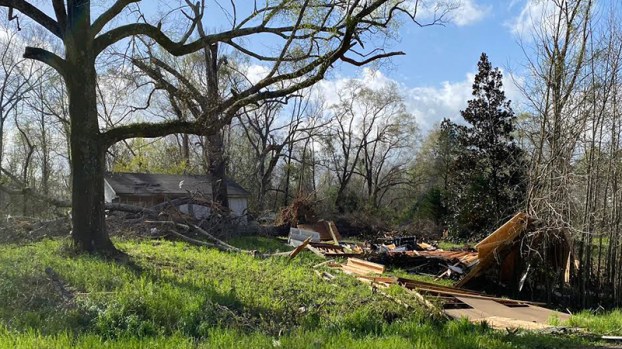 Groups step up in wake of tornado

Severe weather streaked across wide swaths of the state last week and crash landed in Dallas County, leaving considerable damage in the small town of Burnsville, where teams from a variety of organizations are now on the ground lending a hand.

According to Jeff Cothran, Executive Director of United Way of Selma and Dallas County, at least five nonprofit organizations are now at work assessing the damage and offering assistance, many of the United Way partners.

“We’ve been really pleased to see the work these groups are doing,” Cothran said, noting the “robust” response effort. “We have our investments in these groups to be ready to help the community in a situation just like the one we experienced last week.”

Among those groups is the Red Cross, which as of Tuesday was lending direct assistance to at least 12 families in the Burnsville area, as well as the Selma Area Food Bank (SAFB) and the Selma Baptist Association, which has been on the ground clearing brush and debris.

Two other organizations, Samaritan’s Purse and Team Rubicon, have also been working in the area.

“I’m just monitoring our agencies to see where we are and how we might help them if we can,” Cothran said.

Cothran reflected on the dire needs that have cropped up over the last year, noting that “bright” feeling one gets at the start of a new year that quickly buckled under the arrival of the COVID-19 pandemic.

Local donations came in, from the likes of Cougar Oil and Barrett Road Methodist Church, among others, showing “the grassroots effort” the group enjoys locally, Cothran said, and bolstered the group’s pandemic response.

“We have been hustling to find funds to help our community through the pandemic,” Cothran said. “And I feel like we’ve been successful.”

Then came Hurricane Zeta and the hustling resumed.

Cothran said his agency was able to put up $10,000 to help with debris removal and emergency shelter for victims of the storm, but often times it wasn’t enough.

“We live in such a high-poverty area,” Cothran said, noting that the United of Selma and Dallas County covers three of the highest-poverty counties in the state, Dallas, Wilcox and Perry. “People live in homes that might not be in the best state of repair. People in this area are just not economically prepared to deal with it.”

“You add a natural disaster in on top of a depressed economic situation and you have a mega-disaster afterwards,” Cothran added. “It’s intimidating when you are looking at the list of needs.”

A year marked by a public health crisis and multiple severe weather disasters, each bringing with it various symptomatic crises, not only increased the need, but it decreased the amount people were able to donate to relief organizations, such as the United Way and many others.

“All this and the fact that during last year’s campaign we received 10 percent less donations than we did the year before,” Cothran said. “It’s been an uphill battle.”

“Everybody is facing that as far as charitable giving,” Cothran continued. “I think every United Way in the state was down, except maybe one. But the needs have sky-rocketed. And that’s our job, to find the funding and get it and put it on the issues. Unfortunately, we’re seeing the issues, we just don’t have the money to put on them.”

Heightened need and declining funds aside, Cothran noted that the local United Way is still running a myriad of services beyond responding to unexpected crises, including the free clinic it operates with University of Alabama-Birmingham (UAB) Family Medicine, which has remained open throughout the pandemic.

“People still need medical care,” Cothran said. “If they don’t have insurance and a doctor, we were their only source.”

While the last year has been trying for made aid organizations, Cothran is thankful for the support his organization receives and is confident it will continue to be a force for good in the area.

“I’m gob-smacked that it keeps going,” Cothran said. “We enjoy a lot of tremendous support. But when you have a year like 2020, and you have a pandemic and the hurricane and the tornado and these things going on, really it’s a one-two punch and it’s hard to recover from.”