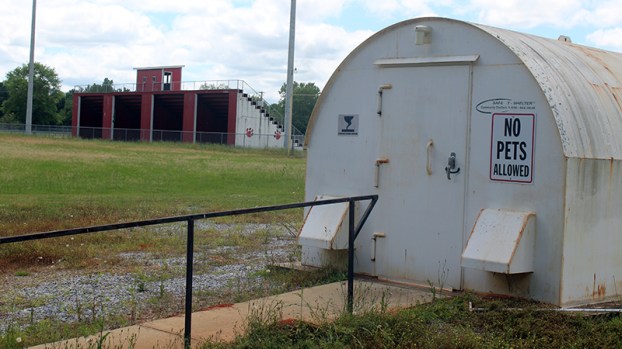 A storm shelter at Southside High School will be opened overnight as the area prepares for severe weather expected to touch down Wednesday night before leaving the area Thursday morning.

On Tuesday afternoon, Alabama Gov. Kay Ivey issues a state of emergency for all 67 counties ahead of expected severe weather that might include tornadoes for wide swaths of the state, which took effect Tuesday night.

“The threat for potentially dangerous weather is rising for much of Alabama tomorrow,” Ivey said in a statement Tuesday. “Out of an abundance of caution, I have issued a state of emergency for all 67 counties to ensure we are ready to act in any way needed from the state level. Projections are showing that this will likely be a widespread event, with some of the most severe weather anticipated late Wednesday night into early Thursday morning. Please make preparations now in the event your area is impacted in some way. I will continue keeping a close eye on the system and encourage every Alabamian to do the same.”

A tornado warning was in effect in Selma Wednesday morning until 1 p.m., according to the National Weather Service (NWS), which noted that “a severe thunderstorm capable of producing a tornado was located over Selma, moving northeast at 30 mph” around 12:30 p.m. Wednesday.

A tornado watch remained in effect in the area until 7 p.m. Wednesday night.

Among the suggestions made in the ADPH release were that people stay mindful of carbon monoxide poisoning as power outages force many to utilize grills, generators and other gasoline, propane, charcoal or other natural gas-burning devices, which should never be used inside.

Locally, shelters are being established at a number of locations in advance of the approaching storms, including in Burnsville, Orrville, Valley Grande and Platersville, as well as Southside High School, Selma High School, Tipton Durant Middle School and one along J.L. Chestn ut Boulevard in Selma.

The Selma-Dallas County Historic Preservation Society (SDCHPS), in partnership with the City of Selma, will host its 45th Annual Historic... read more