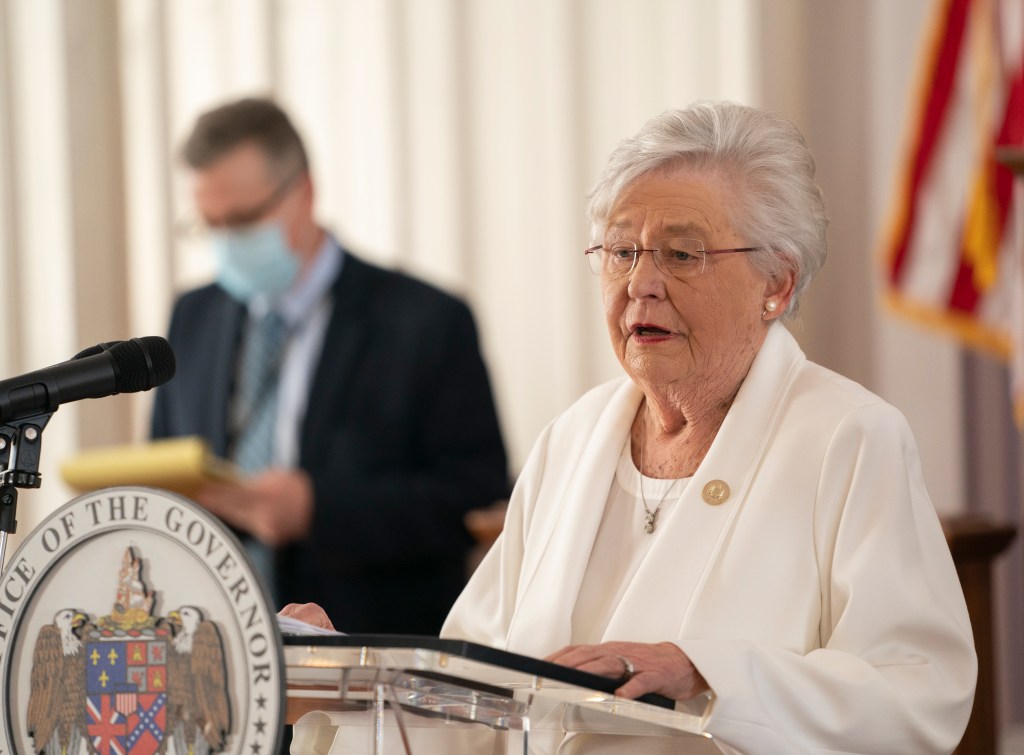 Governor Kay Ivey gave an update on the Coronavirus during a press conference Thursday March 4, 2021 in Montgomery, Ala. (Governor's Office/Hal Yeager)

During a press conference Wednesday morning alongside State Health Officer Dr. Scott Harris, Alabama Gov. Kay Ivey extended the state-wide mask order for another five weeks, through April 9, but said she will not extend the order again once it expires.
While the governors of neighboring states like Mississippi, Tennessee, Georgia and Florida have lifted mask mandates, Ivey said Alabama isn’t “there yet” but is “moving in the right direction”.
According to Ivey, the seven-day-average of COVID-19 cases has fallen to 778 cases per day, an 82-percent drop in cases since early January, and the seven-day-average of those hospitalized due to the virus has fallen to 686, a 77-percent drop since early January.
“Even with this positive news, Dr. Harris and I are both convinced that we need to get past Easter,” Ivey said. “Folks, we’re not there yet, but goodness knows we’re getting closer.”
Once the mask order expires, Ivey said it will be up to each Alabamian to practice “personal responsibility” and wear a mask at their own volition.
“There’s no question that wearing masks has been one of our greatest tools…even when we lift the mask order, I will continue to wear my mask when I’m around others and urge everyone to do the same thing,” said Ivey. “The bottom line is we kept the mask mandate in place for a generous amount of time because it helped.”
Still, Ivey noted that even with a “significant increase in vaccine” slated to come to the state, “we still do not have enough for everyone who wants a shot.”
Ivey also announced some current restrictions under the “Safer at Home” order will be eased – the patients and residents of hospitals and nursing homes will be allowed visits from as many as two caregivers, up from one, and limits on party size at restaurants, bars and breweries have been lifted.
Ivey concluded Wednesday by encouraging Alabamians to practice the Golden Rule and look out for one another.
Harris spoke briefly after Ivey, noting that the state has both surpassed 10,000 deaths due to COVID-19 and has now administered more than 1 million doses of vaccine.
Alabama House Democrats released a statement shortly after Ivey’s press conference praising her “courageous decision” to extend the mask mandate for another month.
“Now is not the time to back down in the battle against COVID-19,” said Alabama House Minority Leader Anthony Daniels, D-Madison, in the statement. “Overall, cases are declining, but there are still counties in Alabama with ‘Very High Risk’ indicators.”
According to the press release, more than 14,000 cases of the disease have been reported over the last two weeks.
“Alabamians are still getting sick and, unfortunately, many are still dying,” Daniels said. “This fight is not over.”