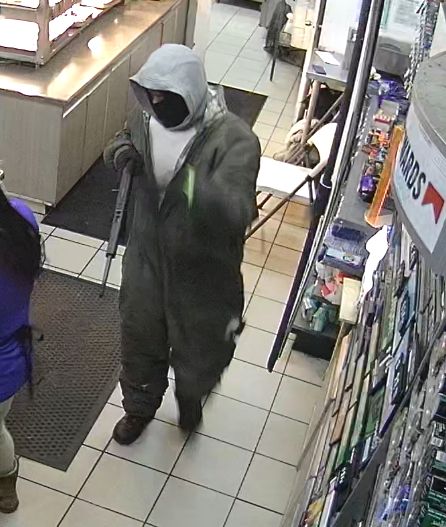 The Dallas County Sheriff Office is searching for a male suspect wanted for armed robbery over the weekend.

Around 8:25 a.m. Saturday morning, Dallas County Sheriff Patrol Units responded to the 44800 block of US Highway 80 East in reference to a panic alarm of a convenience store.

According to the DCSO, the suspect entered the store brandishing a military style rifle demanding money from the clerks. The suspect took money from two registers and ordered the clerks to go to the bathroom before he fled on foot. No injuries were reported.

Contact was made with the complainant who described the suspect as an unknown black male wearing a grey hoodie and a camo jumpsuit. Subject was also described as slender build around 6-foot-2 and was covering his face with a black ski mask and hat.

Anyone with information to help the investigation, call either the DCSO or CrimeStoppers at (334) 215-STOP.