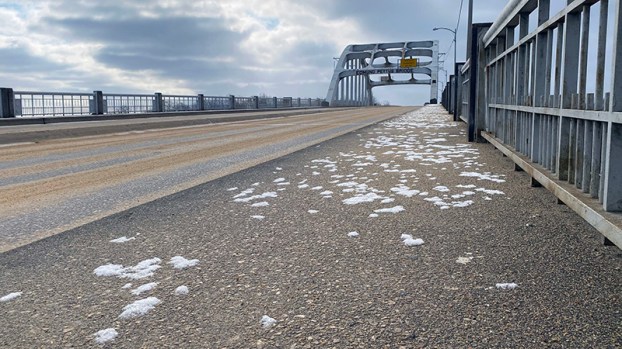 A thin layer of snow doused chunks of the state Tuesday morning and Selma was no exception – trickles of the powdery winter mix could be seen gathering along the sides of the sand-doused Edmund Pettus Bridge and along the side of the St. James Hotel, as well as the tops of buildings and businesses throughout downtown and the rest of the city.

The Mardi Paws event, hosted by Selma’s Purrrfect Pals, originally slated for Tuesday night, was rescheduled for Wednesday night due to the inclement weather – the group said all tickets purchased for the Tuesday night event would be honored Wednesday at Blue Jean Church.

Wallace Community College-Selma (WCCS), as well as its sister campus in Demopolis, closed for the day, as did Selma City Hall.

According to a press release from the office of Selma Mayor James Perkins Jr., a winter storm advisory was issued for the day and all non-essential city services were shuttered due to the “threat of severe weather.”

“The city will continue to monitor the situation and depending on the severity of the event may make further changes to hours of operation,” the press release stated.

Further, the release from the mayor’s office encouraged motorists to avoid local roadways where possible and noted that the Selma Police Department (SPD) and Selma Fire Department (SFD) would be on regular duty while the city’s Public Works Department was “on call and working diligently to address issues as they occur…”

As the winter storms streaked across the country Monday afternoon, leaving a blanket of severe weather from Texas to Maine, the Alabama Department of Transportation (ALDOT) and the Alabama Emergency Management Agency (EMA) issued a release urging drivers to avoid roads through Wednesday.

“Forecasts indicate that hazardous conditions will continue to be a major travel concern through late morning Wednesday, Feb. 17, due to temperatures remaining near or below freezing even during daytime hours Tuesday,” the joint statement said. “Rainfall in areas of the state that had temperatures above freezing during the day Monday could see that moisture freeze tonight as temperatures across the state drop sharply. Anywhere temperatures are below freezing, moisture on pavement surfaces may freeze to form black ice – a transparent layer of ice on the roadway that is difficult for motorists to detect in advance.”

The statement noted that, while ALDOT will work to “pre-treat areas where ice is possible,” all roads and bridges should be considered hazardous during “freezing conditions and wintry precipitation.”

“The best safety measure is to remain at home until conditions improve,” the release stated.

Most of the snow that lightly covered the Queen City Tuesday morning had vanished by midday, but temperatures only reached a few degrees above freezing the rest of the day – after plummeting into the 20s overnight, forecasts expected another round of extreme winter weather Wednesday morning.

The Dallas County Sheriff Office is searching for a male suspect wanted for armed robbery over the weekend. Around 8:25... read more