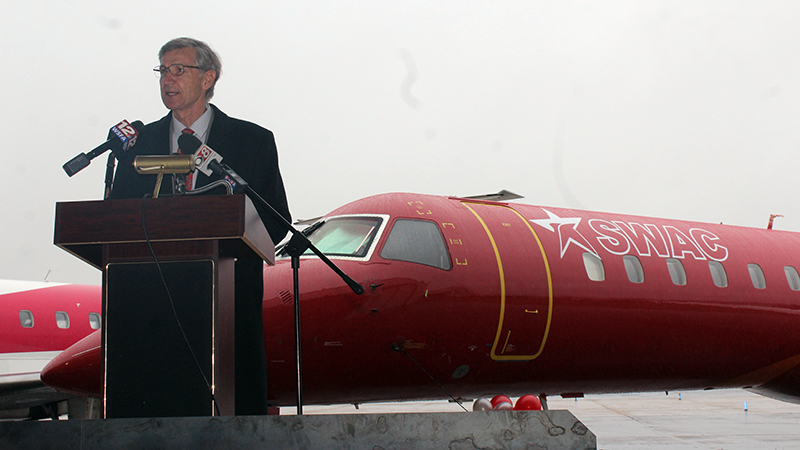 ­The company will use the new Selma location to fulfil its contract with the Southwestern Athletic Conference (SWAC) to fly sports teams to events across the nation, conduct contract maintenance work for other aviation companies and act as a dispatching agent for City Jet flight operations, creating approximately 30 jobs.

According to EDA Executive Director Wayne Vardaman, the EDA is coordinating discussions regarding possible incentives and abatements for the company on the state level.

Though he could not be there in person Monday, Vardaman read a statement from Alabama Department of Commerce Secretary Greg Canfield.

“Craig Field has a rich history in aviation, having played a major role in the training of the nation’s military aviators for decades, and the site has significant growth potential.” read Canfield’s statement. “We’re committed to exploring ways we can help Selma and Dallas County realize that potential and generate additional activity at Craig.”

“I am elated to see activity on Craig’s flight line,” said Vardaman. “We are proud to play our role in landing this business at Craig.”

“City Jet and Turbine Worx is the first flying and maintenance repair operation to select Craig Airport in several years,” he said. “This continues our efforts to create more opportunities for more good things at Craig Field.”

Corrigan put his well wishes for the company in pilot’s terms, wishing the company “clear skies and favorable tailwinds”.

However, the skies were anything but clear Monday morning as heavy rain fell down on hangar 251 from a grey sky.

City of Selma Mayor James Perkins pointed out the silver lining in the less than ideal weather conditions Monday during his remarks.

“What I know about rain is that rain is water, and water helps things grow,” said Perkins. “What we are seeing right now is the watering of this base for the growth of our community… What a beautiful day it is.”

“Any day you have someone invest in Dallas County, it is a great day,” he said. “Every time something like this happens, I am assured Dallas County is going to be okay.”

Turbine Worx, Inc. President Ron Mays expressed his excitement to bring the company to Dallas County and make a difference in the lives of the community.

“I believe that’s the most important thing that any company that comes to a city can do,” said Mays.

Mays said that the company plans to give back by donating to the fight against breast cancer.

One of the company’s jets, on full display Monday, is painted with pink detailing and the breast cancer awareness ribbon in support of awareness of the disease.

Mays said a percentage of every seat purchase on the aircraft would be donated to the Joy to Life Foundation, a non-profit organization with a mission to provide free mammograms and other breast cancer screenings to medically underserved women in Alabama.

In addition to the donations, Mays also said 10 seats on the aircraft per month would be donated to fly those suffering from the disease to the American Cancer Society in Huston, Texas for treatment.

“We are going to play a part in the fight [against breast cancer],” said Mays.