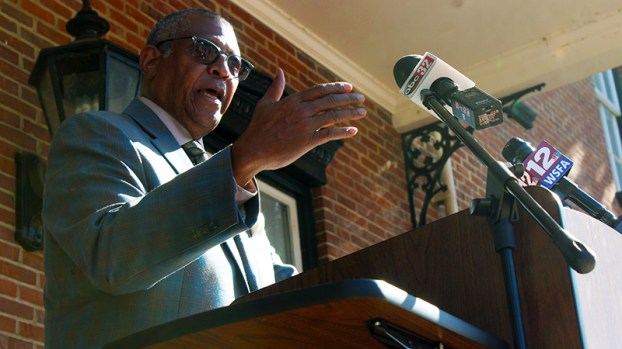 Perkins: ‘Accountability is the order of the day’

In a statement released Tuesday, shortly after the red ribbon fell to the ground in two pieces in front of the historic and newly-renovated St. James hotel, Selma Mayor James Perkins Jr. issued a statement on the reopening of the hotel, as well as the recent devastation in Fultondale, the ongoing COVID-19 pandemic and the sentencing of a former Selma Police Department (SPD) officer for obstruction of justice.

Matthew Blaine Till, 34, a former SPD officer, was sentenced to five years of probation for obstruction of justice by corrupt persuasion of a witness for his involvement in a road-rage incident last April.

According to Selma Police Chief Kenta Fulford, Till pulled over a vehicle last year with the assistance of a Dallas County deputy – the encounter turned violent and the driver was tazed multiple times.

“Accountability is the order of the day,” Perkins said. “As public officials, we are to carry ourselves in a way that we do not need to paint a sign of the side of our cars, ‘Protect and Serve,’” Perkins said in the statement. “Our behavior must be our sign.”

Perkins said that such behavior, which was documented in video evidenced presented in the case, would “not be tolerated” during his administration.

“My commitment to the police officers and citizens is [that] I will not pre-judge, neither will I stand between a violator of human rights and a judge,” Perkins said.

For his part, Fulford rang much the same tune.

“The main thing is [that] we do not tolerate this type of behavior,” said Fulford, who had only been chief for a few months at the time of incident. “When things like this occur, we’re going to address it immediately, we’re not going to hide it and we’re not going to sweep it under the rug.”

Fulford noted that during his bid to become the city’s police chief, he promised to be an “open chief” – transparency in matters like this are just what he meant.

“When something is brought to our attention, we’re going to address it,” Fulford said. “Because this gives the police community a black-eye and there’s no place for it.”

Where the reopening of the St. James Hotel is concerned, Perkins noted that, like the case against Till, the hotel’s reemergence in the Queen City an inheritance passed to him by the former administration.

Perkins offered his praise for both hotel ownership and former Selma Mayor Darrio Melton’s administration, as well as the Selma City Council Class of 2016, for bringing the hotel back to life.

“It is a good inheritance,” Perkins said of the hotel’s opening. “Job well done. Now the work begins to build additional commercial and tourism resources around this diamond and I look forward to working with property owners and developers to do just that.”

In his statement, Perkins also voiced concern over the COVID-19 vaccine rollout, bemoaning the fact that small and rural communities are largely being neglected in the distribution of vaccine.

“My concerns about the COVID-19 endemic and vaccine availability weighs heavily on me,” Perkins said. “Compared to other heavily-populated states, Alabama is small. Therefore, Alabama is receiving a small supply of vaccine. Also, Selma is small and communities like Selma are receiving the smallest portion of vaccines.”

For his part, Perkins said he is “[waving] a red flag” so that lawmakers in Washington and Montgomery can see the Queen City’s need.

“Do not overlook small and rural communities,” Perkins said. “Individually, we may be small [in] size, but collectively we are the majority. I ask that federal and state officials pay close attention to us because we too are hard hit and we are paying attention.”

Perkins also noted his “sincere concern” for residents in Jefferson County, where an EF-2 tornado touched down Monday and caused widespread damage, as well as one death and dozens of injuries, in Fultondale.

“Selma is just recovering from a natural disaster and we are very sensitive to those who are suffering at this time,” Perkins said, noting that he contacted Fultondale Mayor Larry Holcomb and offered assistance if needed.