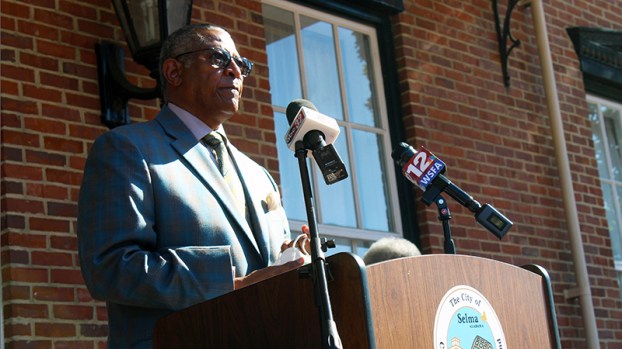 Tumult and chaos defined 2020, a year in which the world struggled to combat a global health crisis and the nation saw widespread protests and a contentious presidential election, but when Selma Mayor James Perkins Jr. surveys the previous year he sees something much different.

“Looking back on 2020 – mixed blessings, for sure,” Perkins said. “Blessed that the citizens gave me an opportunity to serve in this capacity.”

Perkins took office in November, the same day a devastating hurricane ripped through the area.

“I knew we had some challenges going forward – in fact, I had made a statement saying that the only way we can go at this point is up,” Perkins said with a slight laugh. “And then Hurricane Zeta hit the day we took office.”

And the earliest days of Perkins term, now roughly two-months old, have been spent battling both the spread of COVID-19 and the mounds of debris left behind by Zeta.

“That’s really been a big challenge for us,” Perkins said. “When you combine Hurricane Zeta on top of COVID-19 and many challenges we have within our municipal government, 2020 has been a mixed blessing for me – a challenge, but at the same time blessed to have the opportunity to serve.”

But Perkins is less focused on the year that was and more attuned to the year to come, with plans to host a “State of the City” address within his first 100 days – tentatively planned for February – to provide citizens with a “snapshot of progress thus far,” progress that includes personnel changes, boosts to public safety, a full-frontal assault on the city’s trash problem and more.

According to Perkins, previously laid-off workers are already being called back to work.

“We have made some minor changes at this point in personnel,” Perkins said, noting that a “good synergy” exists between the current team. “What I’m finding is that a lot of the people employed with the city are really great people and they are talented and they are adjusting to my management style very well. In fact, I’m really excited about working with the team we have.”

Among Perkins’ list of top priorities was the “trying situation” being faced by the Selma Fire Department (SFD).

“I think people focus on the police so much they forget about the fire department,” Perkins said, adding that after a close look he found the fire department to be in the “worst shape” of all city departments. “I think we are going in the right direction in addressing the many challenges we have with that department, but that has been a real eye-opener.”

According to Perkins, there was a real threat that the city might lose another station, having already lost the Woodrow station – former SFD Chief Chris Graham retired just as Perkins was taking office and Gabriel Sharpe was appointed interim chief, leaving a gap in the department’s ranks.

But Perkins said the city rushed to hire three new firefighters and bring back three retired firefighters on a part-time basis to help out in the department.

“We are actually looking up and moving forward,” Perkins said.

While Perkins is keeping a keen eye on the SFD, he is also proposing new funding through his proposed budget to bolster the ranks of the Selma Police Department (SPD).

According to Perkins, his proposed budget includes an “across the board” pay raise for municipal government workers, specifically those in public safety, as well as a loan program to assist newcomers in purchasing a home locally.

For his part, Perkins said providing local law enforcement with a “fair and balanced wage” and providing avenues for officers to lay down roots in the city would go a long way in ensuring that the city isn’t just a “training ground” for officers, where they work in the city for a while before departing to a better-paying department.

“My goal is – you know how people say to think outside of the box, I say get rid of the box,” Perkins said. “We don’t need a box right now. We need progressive ideas. I feel good about where we are right now and where we’re going.”

Where the city’s trash problem is concerned, Perkins has set a goal of seeing every citizen in Selma have a garbage can within the next 90 days and is currently negotiating new terms for city’s garbage collection contract.

“That’s going to be an important part in getting the city clean,” Perkins said.

Vaughan begins second round of vaccinations

Following announcements last week from the Alabama Department of Public Health (ADPH) that COVID-19 vaccines would be administered to first... read more