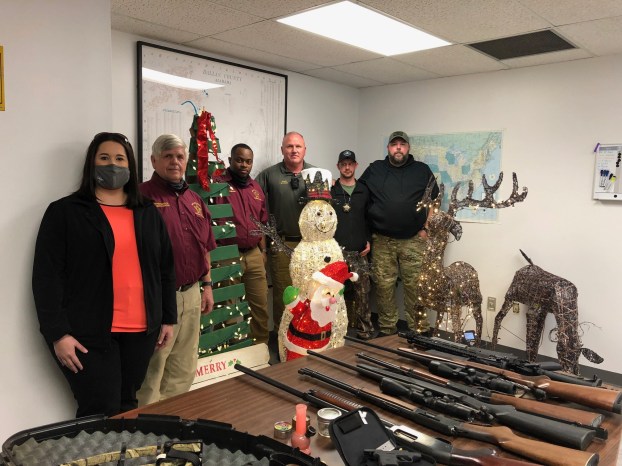 Some Christmas decorations were damaged and other items were stolen at the Valley Grande City Park walking trail, according to Dallas County Sheriff Mike Granthum and Valley Grande Councilwoman Sara Day.

Granthum said the incident took place on Dec. 18 between 4:30 and 5 a.m. and it was caught on camera. A wooden Christmas tree, electric reindeer were stolen, but later recovered at 122 Deepwoods Circle a few days later.  Granthum said it’s the residence of Jessy Jeter, who wasn’t found. Granthum said a warrant is out for Jeter’s arrest.

“We heard that he may be out of town,” Grantham said. “We believe there will be other arrests made in this case. This is a felony.”

Granthum said the DCSO found several guns and rifles on the property, which may be connected to the crime.

Day and Granthum both credited Valley Grande residents for contacting the DCSO and City Hall with information.  Residents called the DCSO 123 times about the theft. The city spent $5,000 on the holiday decorations.

“We appreciate the community’s help,” Granthum said. “The city spent several hours and money on these decorations at the park. Santa Claus can come to Valley Grande, but the Grinch can’t.