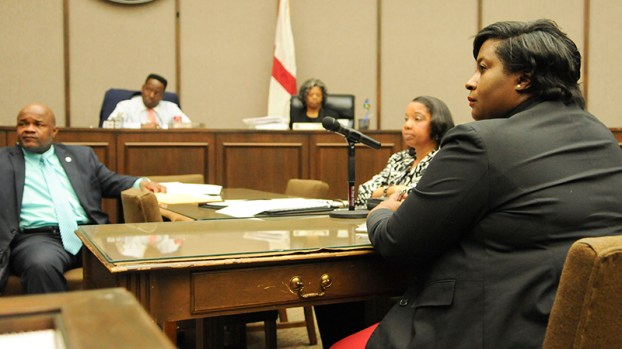 Selma City Treasurer Ronita Wade was reinstated Tuesday after a vote by the council. Wednesday, she was locked out of her office when she returned to work. (Blake Deshazo | Times-Journal)

Only days after the Selma City Council voted to approve a recommendation from Selma Mayor James Perkins Jr. that Selma City Treasurer Ronita Wade not be reappointed to her position, removing her from office immediately upon approval of the mayor’s resolution, Montgomery attorney Julian McPhillips has sent word that a lawsuit against the city is imminent.

“We were disappointed, of course, not  entirely surprised, however,” McPhillips said of the move by Perkins and the council’s approval of it. “Politicians tend to repeat the errors of the past and here that has happened.”

The letter, addressed to Selma City Clerk Ivy Harrison, laid out Wade’s claims against the city, which assert that her removal from office was politically motivated and therefore constitutes a violation of First Amendment rights.

“Before the [Monday council] meeting, Mayor Perkins, at his first staff meeting with Ms. Wade, informed her that he was unhappy with her still-existing suit against the City of Selma and its former Mayor Darrio Melton,” the letter from McPhillips’ firm stated. “Ms. Wade believes that Mayor Perkins was strongly motivated by his unhappiness with Ms. Wade. That is why he made the recommendation for her termination, which the City of Selma City Council accepted.”

The letter goes on to state that such actions are a violation of Wade’s First Amendment right to freedom of access of courts and references the U.S. Supreme Court ruling in the case of Borough of Duryea v. Guarnieri to support the assertion.

In that case, Charles Guarnieri was fired from his post as police chief in Duryea, Pennsylvania – after filing a union claim, which went to arbitration, Guarnieri was reinstated following a disciplinary suspension.

Upon his return, Guarnieri was issued directives outlining his responsibilities – feeling these directives were in retaliation for his previously-filed grievance, he filed suit against the borough.

The court, directing the jury that thew lawsuit and union grievance were “protected activity…under the constitution,” ruled in Guarnieri’s favor – the borough appealed, asserting that Guarnieri’s suit and grievance were not protected by the First Amendment because they didn’t address an issue of public concern, but the Court of Appeals found that “a public employee who has petitioned the government through a formal mechanism such as the filing of a lawsuit or grievance is protected under the Petition Clause from retaliation for that activity, even if the petition concerns a matter of solely private concern.”

The Supreme Court ultimately found that lawsuits constitute petitions under the First Amendment’s Petition Clause, but “a government employer’s allegedly retaliatory actions against an employee do not give rise to liability under the Petition Clause unless the employee’s petition relates to a matter of public concern.”

McPhillips alleged separately that Perkins’ move might be in retaliation for Wade backing another candidate during the mayoral campaign, a violation of Wade’s First Amendment right to freedom of political affiliation – according to McPhillips, Perkins sought out Wade’s support during the campaign and was “unhappy” upon learning that she was backing another candidate.

Along with the letter, which is the “preliminary prerequisite” to a lawsuit – in which McPhillips will seek $100,000 in damages for Wade under state law – McPhillips said another letter would be sent to Perkins and the council advising that legal action can be avoided if the council rescinds its vote and Wade is reinstated to her position.

Banking on the future