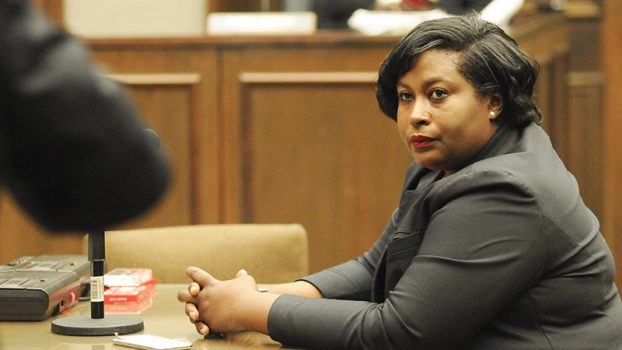 By a 5-4 margin, the Selma City Council voted Monday night to remove Selma City Treasurer Ronita Wade from office at the recommendation of Selma Mayor James Perkins Jr., who asserted that his request was due to ongoing “performance issues.”

By the end of the meeting, which was held online, 100 participants were in attendance.

The meeting opened with Perkins once again reading his proclamation – which calls for Wade to be removed from her position and replaced on an interim basis with Sequita Oliver – and laying out his case against Wade.

Perkins pointed out a number of “very disturbing” issues with the city’s budget, including the miscalculation of benefits spending due to the use of outdated costs.

“Every benefit that’s calculated for every employee is calculated incorrectly,” Perkins said.

Perkins also noted that former city employees were still included in the budget, including Dallas County Probate Judge Jimmy Nunn, who’s still listed as the city attorney, and a deceased former employee of the Planning and Development Department.

“That’s not a random mistake or a random human error,” Perkins said.

Perkins also pointed to the Alabama Department of Public Examiners report, which was damning for the city’s finance department and several others, as well as the recent audit and the downgrading of the city’s S&P bond rating.

Where the audit is concerned, Perkins stated that assets totaled more than $52 million and total liabilities came in at more than $35.2 million but the city has an unrestricted deficit of -$20 million.

Where the bond rating, which was lowered three notches in December 2018, is concerned, Perkins stated that as of Oct. 2020 the city has no bond rating.

“As mayor of the city, I have a responsibility to actually make a recommendation to address these issues and that’s what I’m doing,” Perkins said. “We were elected to fix this. We must put together a corrective action.”

Wade then attempted to defend herself, asserting that others should be held accountable alongside her.

“The question is, whose performance issue? Management doesn’t just include the treasurer, it also includes the council and the mayor’s administration,” Wade said.

Wade noted that where the budget is concerned, the previous council had simply carried over the previous year’s budget since 2016 – due to conflicts with former Mayor Darrio Melton, she was not permitted to be involved in the budget process and was out of the office for extended periods of time.

Wade said the task of keeping up with fixed assets falls on the Selma City Clerk’s office and asserted that she raised alarms about issues in the audit, which was signed off on while she was out of office.

Further, Wade asserted that financial concerns were not the only reason for the city’s decreased bond rating.

“Those ratings…talk about the climate of the city…it talks about the layoffs,” Wade said. “That’s a lot to put on the treasurer’s shoulders. I’m not perfect and I don’t claim to know or have the answers to everything, but I cannot take responsibility when you say ‘management’ and there’s a question about ‘management’…the things that have been pointed out are not just about finance.”

“The public works director has to take ownership, has to claim responsibility, of the public works department and the conditions upon which he or she has authority and responsibility to manage,” Perkins said. “The personnel director has to take ownership and take responsibility for that department. The treasurer must take ownership over the finances of the city. I have no personal grievance or beef with Miss Wade. I have evaluated the documents…I’ve looked at the audit report, I’ve looked at the public examiners report and other documents that have been shared with me and I feel that the recommendation I am making to not reappoint Miss Wade is in the best interest of the city at this time.”

Wade disagreed, claiming that Perkins voiced concern regarding her lawsuits against the city during their first meeting after his election.

“I aim to do my job and do it correctly,” Wade said, noting that along with being in and out of the office due to Melton’s continued efforts to have her fired, she led an understaffed department. “What I have attempted to do is protect the assets of the city and execute my fiduciary responsibilities.”

“Because I am involved in the financial matters of a company in my full-time life, unfortunately, I understand the mess the city’s in,” Harvill said. “I do not by any means think that Miss Wade is responsible for the condition that the city is in. She may have contributed to some of it…but I do not place 100 percent of the blame on Miss Wade. This is a very, very unfortunate situation. The past leadership was such a void, it’s just very disheartening. Unfortunately, there’s just no easy way out of this.”

Christie Thomas lamented the fact that the new council, just over a month into its term, was faced with such a difficult decision.

“I hate that it had to come this quickly…all we’re trying to do as the council…is try to do the right thing for the City of Selma,” Christie Thomas said. “We have made decisions in the past, some I liked, some I did not like, and we’re about to do that again tonight.”

Christie Thomas then wondered if some disciplinary action could be taken, rather than removing Wade from her position, but Perkins rejected the idea.

“This is one of those situations where we cannot kick this can down the road,” Perkins said. “I have a responsibility. I have a mandate from the citizens to look at the problems we have.”

Perkins added that there is a “distinct difference” between his suggestion to not reappoint Wade to her position, which would have the impact of removing her from her job, and firing her.

Carmichael talked about the “enormous” responsibility placed on the city treasurer, while James bemoaned the overall picture being painted and Jemison lamented the “tough decision” to be made.

For his part, Randolph asserted that the mayor’s interim treasurer, approved to the position by virtue of the council’s vote in favor of the mayor’s proclamation, previously transferred $1.2 million without consulting the council – Oliver was appointed Assistant City Treasurer in August 2003 after Perkins, during his first term in office, placed Finance Director Vickey Locke on administrative leave for unspecified reasons.

“How can the mayor write a resolution for the council to fire our appointed [position]? If we sit here and let this go on, it’s just not right,” Randolph said. “Miss Wade has been a strong person.”

Jannie Thomas likewise came to Wade’s defense, while Johnson decried the communication breakdown between the mayor’s office and the finance department and took Wade to task over unpaid bills to Fuller Supply and the Dallas County Sheriff’s Office (DCSO), which Wade said was paid as soon as she returned to office following one of Melton’s ouster attempts, as well as the contradiction between her assertions that employees should have never been laid off while the city also needs more revenue or a cut in spending.

“Where do you feel we’d be at if all the employees were still there?,” Johnson asked.

Johnson then criticized Wade for recommending that the council repair old recreation department zero-turn mowers before purchasing new ones, as Johnson was requesting at the time, while saying nothing of giving employees a bonus – Johnson claimed Wade was out of line when suggesting repairing the mowers rather than purchasing new ones and said that she should have opposed a bonus for city employees.

Young was the last to speak and, like many of his colleagues, voiced regret over the fact that the new council was faced with such a hard task.

“This was something that did not take place overnight and this is something that’s going to take time to get out of,” Young said, noting that he had hoped the finance committee could have addressed the issue before Perkins recommended removing Wade from her job. “We’ve now been made aware of some mistakes and errors that have been made. It’s my hope that we can forge and go forward and not do things like the past and point fingers at one another and blame one another like in the past and move forward together.”

Randolph motioned that the council table the issue but failed to garner a second – Jannie Thomas asserted later that she had attempted to second the option but was unheard due to technical difficulties.

James then motioned to accept the mayor’s recommendation and Johnson seconded.

Per the resolution, Wade’s firing took effect immediately and she will be provided a 30-day severance package.