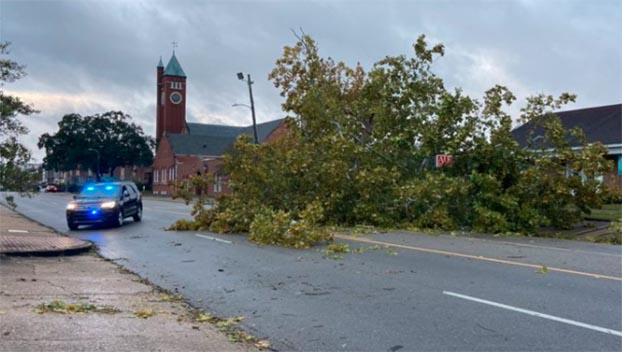 After holding off on approving the $1.1 million Hurricane Zeta cleanup plan presented by Selma Mayor James Perkins Jr. Tuesday night, the Selma City Council held a special called meeting Friday to greenlight the process, which should see work underway as early as Sunday.

Friday’s vote follows an announcement from Alabama Gov. Kay Ivey that the federal government had approved the state’s emergency declaration, clearing the way for several Alabama counties to receive public and individual assistance, with Dallas County listed as eligible for both.

According to the statement from Ivey’s office, the approval for assistance followed a phone call between Ivey and U.S. President Donald Trump.

“On my call with President Trump earlier today, he assured me that we could consider our request for federal aid following Hurricane Zeta done and he quickly delivered,” Ivey said. “Within hours of our call, FEMA approved our request for public and individual assistance. This will go a long way in providing the people impacted by Zeta the help they need.”

The plan presented Tuesday night and approved unanimously by the council Friday – Ward 1 Selma City Councilman Troy Harvill was not in attendance for the meeting – contracted with DRC Emergency Services for debris removal at a cost of $891,850 and Debris Tech for monitoring services at a cost of $299,160.

During Friday’s special called meeting, Perkins, along with representatives from both companies and others involved in the process, stated that the job would require “three passes,” with as much as 80 percent of the work completed during the first pass, set to be completed by Christmas.

“The first pass will get up all the debris that’s on our streets currently,” Perkins said. “And that’s a good thing.”

The second and third passes will give property owners to collect any additional debris that needs to be collected and removed.

“There has to be a weekend between each pass,” said Selma City Engineer Ray Hogg. “That allows the property owner that couldn’t get everything out to the street for the first pass to get it out two more times.”

Council members discussed the use of local subcontractors, with representatives from the companies stating that at least four local companies would be used for such work, as well as the need for residents to separate household trash from hurricane debris to be collected over the coming weeks.

“The whole idea is to expedite this to get it done,” Perkins said. “We start now, we have a chance of getting this up before Christmas. If we don’t, we can’t blame the contractors for not doing so.”

With assistance from Selma City Attorney Major Madison, Perkins then pivoted to a push to have Selma City Treasurer Ronita Wade removed from office and replaced by Sequita Oliver – there was initially concern regarding the possibility that issues of “good name and character” might be discussed, thereby warrating an executive session, but Madison advised the issue should be taken up in a public meeting since it deals with an appointed position.

“I think this is a very important issue,” Perkins said.

Perkins cited a number of concerns that led him to push for Wade’s removal, including the following, which were shared with the council in a document during the meeting: “the Office of Public Examiners report; audit concerns specific to adjustments made: quantity, frequency, ongoing and continuous nature of adjustments that is extending the time to do an audit and significantly increasing the cost of operations and the audit; S&P Bond rating reductions on [Wade’s] watch; poor relationships with coworkers and staff, poor display of professional conduct and disrespect of chain of command.”

“I could go on an on, council, about what I’m seeing,” Perkins said. “I’m just concerned at this point…it has not been done properly.”

Perkins said the recommendation was made in the interest of doing what is best for the city.

Because the issue was not included in the agenda for the meeting, the council opted to take it up during a special called meeting Monday.

“I do feel there should be a sense of urgency with this matter,” Perkins said.