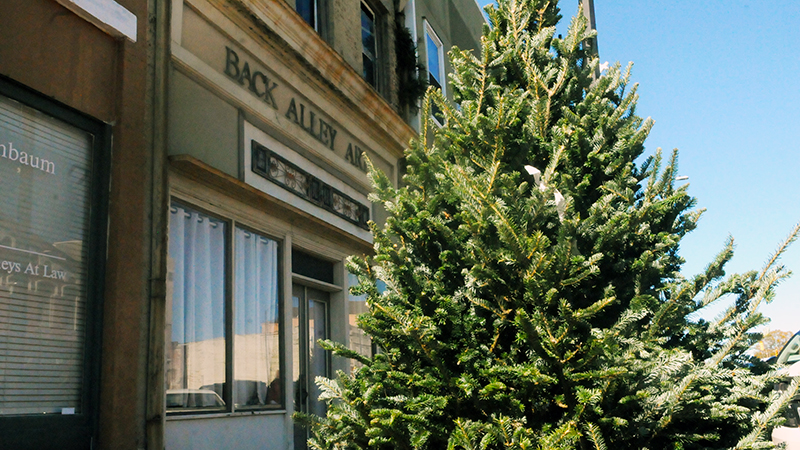 With a cold wind swirling around them, volunteers with the Dallas County Family Resource Center (DCFRC) were seen up and down Broad Street Monday as they installed rows of Christmas trees in front of downtown businesses as part of the organization’s annual Christmas Tree Winter Walk fundraiser.

The annual fundraiser, which usually takes place at Butterfly Park along the riverfront, migrated to Selma’s main drag this year, which posed a new series of challenges for the DCFRC crew.

“This event is always quite an undertaking,” said DCFRC Executive Director James Thomas. “But we’re working through it. This is our only fundraiser, so we really need this support. We’re just plugging away.”

According to Thomas, there has always been an issue with the trees toppling over, so Gindlesberger created a t-shaped wooden base for the trees and Cosby-Carmichael donated sand bags to hold the trees in place.

Thomas and Gindlesberger started the day off filling the sandbags, which amounted to a total of 8,000 pounds – Thomas knows, as his trailer kept bottoming out and suffered flat tires under the weight.

“This is the sturdiest our trees have ever been,” Thomas said. “But it also made it more work to set up all the trees.”

Thomas said the group’s holiday fundraiser moved downtown for a couple of reasons, the first being the fact that the downtown park was being repaired.

But a request from Queen City Market Owner Mandy Henry to the Selma City Council to remove the holly bushes downtown presented a unique opportunity to fill the empty spaces with festive firs.

The council approved the requests from Henry and Thomas and made quick work of removing the bushes.

“Not only was it approved, but the city was able to remove every one of the holly bushes before it was time to set up our trees,” Thomas said. “That’s the first time I’ve seen the city council get so much accomplished in such a short time.”

And the downtown setting provides other benefits, Thomas said, including the fact that nearly every tree has access to power outlets.

“It’s even better than it was before,” Thomas said. “It’s a way to light up downtown Selma. Think about all of the traffic that comes down Broad Street during the day and how beautiful it’s going to be all lit up at night.”

Additionally, Thomas said the new location provides more visibility to the trees – and, by virtue, the organization they are set up to raise money for – and will hopefully drive traffic to downtown businesses.

“It’s such a symbiotic relationship,” Thomas said. “The businesses benefit from the increased traffic downtown and it gives us the funds to help deal with the influx of people we’ve had because of COVID.”

Thomas said the DCFRC has seen a dramatic increase in needy people seeking assistance as scores face eviction after losing jobs to the pandemic.

“We have some money to address that, but not enough,” Thomas said. “When we do fundraisers like this, it gives us the funds to help people we normally couldn’t help.”

“We’ve already surpassed what we did last year,” Thomas said, noting that some sponsors have yet to send in their checks. “I feel safe to say this is the most successful year we’ve had already.”

Thomas credits that success to a local urge toward positive change.

“I think the City of Selma is ready for a change and they’re ready to move in a positive direction and people are wanting to support other people,” Thomas said. “I feel like people are aware of the work we do in the community and they’re willing to support us and they know this is the best way to support what we do.”

The annual fundraiser goes into full effect Friday with a tree lighting ceremony and Thomas hopes that its new downtown home becomes permanent.

“If everything goes smoothly, then I hope we can continue to have it downtown because I feel like it’s such a better location downtown,” Thomas said.

The fundraiser is the group’s only one the year and Thomas insisted that it is absolutely necessary for the organization to continue its work, which provides rent and utility assistance to needy families, parenting and personal finance classes, housing assistance, counseling services and more.

“The support we get from this event allows us to continue to help the population of Dallas County,” Thomas said. “Without this money, we can’t continue to function. It’s so crucial to our operations that, without it, I don’t know if we could stay open.”