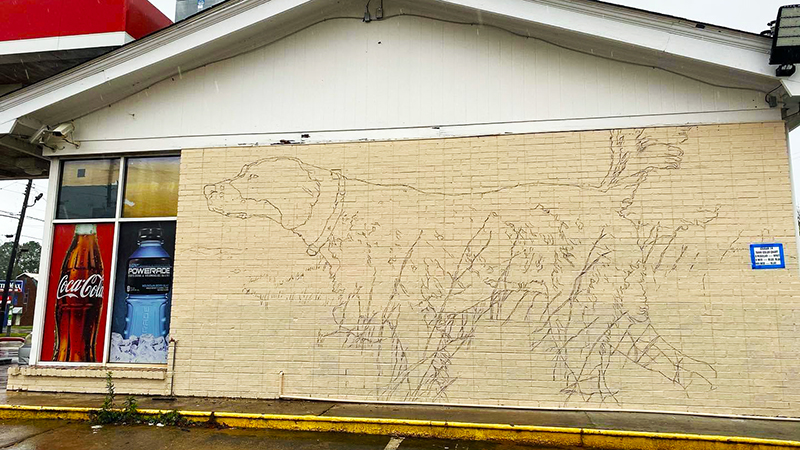 ArtsRevive and Cougar Oil are joining forces to brighten up a “high-profile corner” in Selma with a new mural from artist Michael Vaughan Sims, who painted the downtown butterfly mural, which will appear on the west wall of Cougar Oil’s location near the intersection of Highland Avenue and Broad Street.

“The murals help each other,” said Cougar Oil owner and ArtsRevive Treasurer Rex Jones. “It’s not one of those things where they’re competing against each other, they help each other. The more of them we have, it gives us another attraction that people want to see. I think each of the murals build each other up.”

Selma has become home to a variety of murals over the past few years – along with Sims’ works, artist Tres Taylor has installed two murals in the city and a mural celebrating Civil Rights-era icons was installed along Broad Street in March.

For his part, Jones said the idea for another mural came to him organically, noting that he has a “perfect canvas” in the empty, white wall of his Highland Avenue business, as did the choice to once again tap Sims for the job.

“We all kind of like his style,” Jones said of Sims. “It’s just kind of conservative, something everyone likes. I’ve just really enjoyed working with him.”

Jones said the mural accompanies plans for him to renovate Cougar Oil locations throughout the area, changing the image of the stores – in part – through art.

Along with the mural downtown, Sims partnered with ArtsRevive previously for a mural in Camden.

According to Jones, the new mural’s design, which will feature a hunting dog set atop a background of rust-colored field growth, was selected among a group faced with four or five design options.

“This is just something different,” Jones said of the coming mural. “Everybody I asked…kept coming back saying the dog was their favorite.”

Whereas Sims’ previous work in the city features a largely one-dimensional perspective, Jones said Sims’ “depth” will be on display with the new addition.

“I like art, but I’m not artistic whatsoever,” Jones said. “It really amazes me, people who have that talent, so I think seeing this mural come to life is going to be pretty fun.”

But gearing up to paint a mural as wet, cold weather touches down on the region poses a new set of problems for the artist, who executed his last project during the dog days of Summer.

“We get into this time of year and it presents a different set of challenges,” Jones said.

Whereas Sims, who painted the butterfly mural on an east-facing wall downtown, had to work in the pre-noon hours and contend with quickly-drying paint during the summer, the upcoming project will inevitably face delays as brutal cold and constant precipitation throw a wrench in work plans.

“I really think it’s going to turn out to be something amazing,” Jones said. “Something I hope adds just another element to Selma. Those people traveling through on that high-profile corner, this gives them a good first impression.”

Jones said painting could begin as early as Wednesday, weather permitting, with the full project expected to be completed in the coming weeks.

The project, which is being funded collaboratively by Cougar Oil and ArtsRevive, illustrates what can be accomplished when Selma’s businesses and nonprofits team up, Jones said.

“We’re building our community with art,” Jones said, referencing the mission statement of ArtsRevive. “This is just another way we can do that and another example of how local businesses and nonprofits can work together to try to improve Selma. Obviously, for me, I’m pretty involved on both sides, but it goes with what our mission is with ArtsRevive…and with Cougar Oil, I’ve said in the past that these businesses can work with our nonprofits for the good of Selma.”