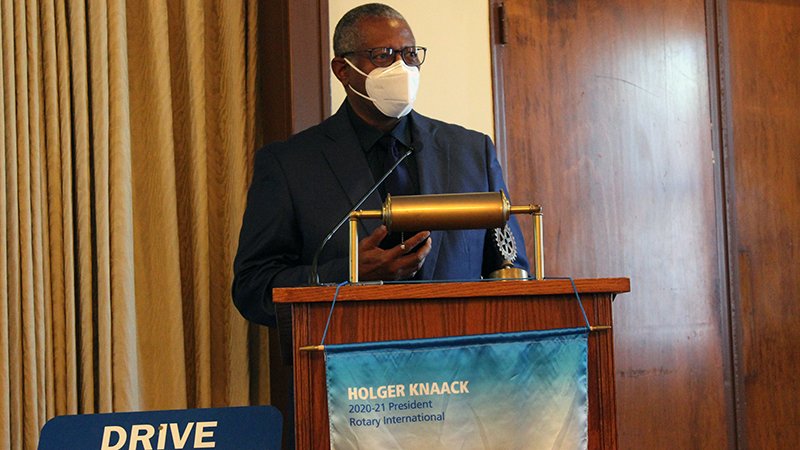 During a midday meeting of the Selma Rotary Club Monday, Selma Mayor James Perkins Jr. discussed his recent proclamation aimed at curbing the spread of COVID-19 in the city, as well as issues related to public safety and ongoing Hurricane Zeta cleanup efforts.

Perkins noted that the local increase in COVID-19 cases is “alarming,” referencing one woman who attended a recent virtual discussion athat has so far lost 10 members of her family due to the disease, and called on people to change behaviors that have allowed the virus to spread in the city.

While Perkins said his proclamation, which will reinforce the provisions in the statewide “Safer at Home” order, will not call for businesses to be closed, he noted that there will be a 25-person limit set on all public gatherings and all businesses will be required to close by 10 p.m.

When asked if crowd limits would apply to churches, Perkins responded in the affirmative, saying that community leaders must “lead by example” if they hope to see the community adopt safer habits.

“We are having a significant number of super-spreader events,” Perkins said. “These are the kinds of things we really need to address.”

“This thing is serious,” Perkins said of the disease later. “Death and dying is happening and a lot of folks are really sick.”

Perkins said his hope is that people will adhere to the new rules, which also require masks to be worn in public, and be able to enjoy a “less restrictive” Christmas holiday.

Perkins noted that bars and restaurants that violate crowd size requirements can be closed and said that he has directed Selma Police Department (SPD) Chief Kenta Fulford to enforce other provisions of the proclamation.

“I wish there was an easier way to do this, but we’ve got to do better,” Perkins said. “I have no desire [to close businesses], because I understand the impact of shutting down the city, [but] we’ve got to take control of this. It’s not acceptable.”

Though Perkins did not provide details for what types of enforcement measures local law enforcement will be empowered to take, he said he directed Fulford to “do the best we can with what we have.”

The city’s COVID Czar – a position Perkins said last week would be filled by Monday at no additional cost to the city – has been selected, but Perkins said a formal announcement was being delayed until the employee can confer with his or her current employer.

Where Hurricane Zeta cleanup efforts are concerned, Perkins noted that the city’s request for proposals (RFP) was issued last week and contractors have until Dec. 4 to respond.

Once responses are received, which require contractors to provide an expected completion date for the project, Perkins said a “mega-contractor” should be secured within a week to handle the citywide cleanup effort.

Perkins also noted that he is planning a meeting with local business leaders to discuss public safety issues, which he said play a big part in recruiting businesses to the area.

“I think that is a major hindrance to us being able to recruit businesses into the community,” Perkins said, adding that good economic news was on the horizon. “Help is on the way. We have a lot of things in the works.”

Attendees lobbed several questions at Perkins, including one aimed at finding out whether or not the new administration planned to replace or rehire any of the 68 city employees laid off in November 2018.

According to Perkins, many of the positions scrapped in the 2018 purge were defunded in the city’s budget – those positions will have to be replenished in the budget process – but those that were not defunded are being refilled at a speedy clip.

“We literally have to reconstruct municipal government,” Perkins said. “That’s our charge.”

Another attendee asked about the city’s plans to compensate residents who paid for storm cleanup work on city property – the woman alleged that a tree near her property toppled and blocked the street; after several days, she paid to have the tree removed from the street – which led Perkins to discuss the current confusion concerning contracts approved by the previous council.

Perkins has asserted that the contracts – the most notable being the one with Lemarkus Snow’s Snow Cleaning Service, which was discussed at last week’s Selma City Council work session – “don’t exist,” saying they are “part of the dysfunction” related to the last administration.

According to Perkins, the citywide cleanup effort has been hampered by the federal government’s delay in signing off on the state’s disaster declaration, which would ensure that municipalities can be reimbursed for recovery costs.