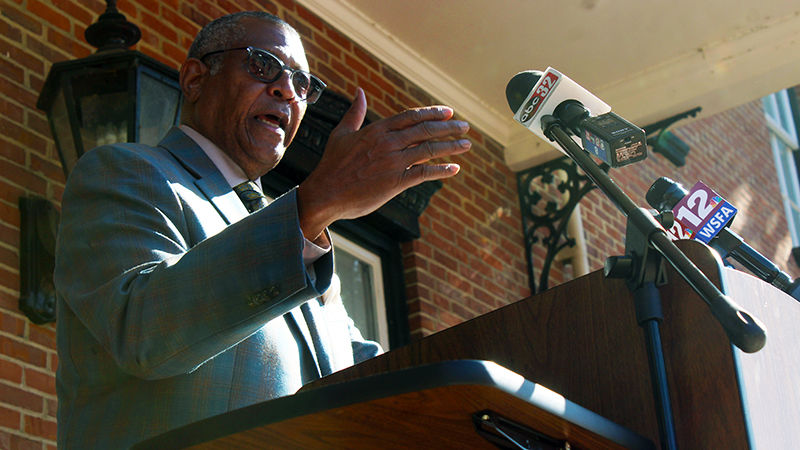 During a press conference on the steps of Selma City Hall Friday, Selma Mayor James Perkins Jr. announced that he was preparing an official proclamation, to be issued by Monday, aimed at curbing the spread of the COVID-19 pandemic, which has surged across the nation in the past weeks.

Perkins noted that, according to the Alabama Department of Public Health (ADPH), Selma saw a steadily-rising case count between Nov. 14 and 18, which indicates a coming “crisis.”

“This is a very disturbing trend,” Perkins said, noting that a change in behavior was necessary to slow the disease’s spread in the Queen City and surrounding area.

Perkins said the new proclamation would include all of the provisions in the state’s “Safer at Home” order, some of which would be amended, and would reinforce a mask mandate in the city and an attendance limit on public gatherings.

Perkins said he is also considering a curfew and asked that all citizens “voluntarily comply” with the order in the interest of saving lives.

Additionally, making good on a campaign promise, Perkins said he would appoint a COVID czar to be announced Monday, who will work at no cost to the city.

Perkins also stated that coronavirus protocols, which already have a body temperature scanner place in city hall, would likely be strengthened in the coming proclamation.

Where Hurricane Zeta recovery is concerned, it was noted that requests for proposals (RFPs) would go out Friday for removing debris from city streets and right-of-ways – responses are due by Dec. 2 and work will begin shortly thereafter.

According to Perkins, the costs associated with the Zeta cleanup should be reimbursable, though he noted that the federal government has yet to sign off on the state’s emergency declaration issued in response to the storm.

“We are moving as swiftly as we can to get this work done,” Perkins said.

The mayor also addressed the recent incident in which a bullet entered his home, saying that he and his wife have lived in the same home since 1994 and “endured” the decline of the city – particularly on its East side – and listen to the same gunshots ring out as the rest of the city.

Perkins said shots have entered his home before when he was mayor, but he opted not to report the incident.

“This time, I a taking a different approach,” Perkins said.

The mayor called on the Selma Police Department (SPD) to conduct a “full and thorough” investigation of the incident and pushed SPD Chief Kenta Fulford to include a “full bank of technology” requests to be included in the city’s budget.

“This insanity has to stop,” Perkins said.

While it is still unclear whether or not Perkins was targeted, the mayor believes the shot fired into his home was intentional.

“In order for that projectile to do what it did…it could not have been fired from a long distance,” Perkins said, adding that the “chances are great” that his home was struck intentionally.