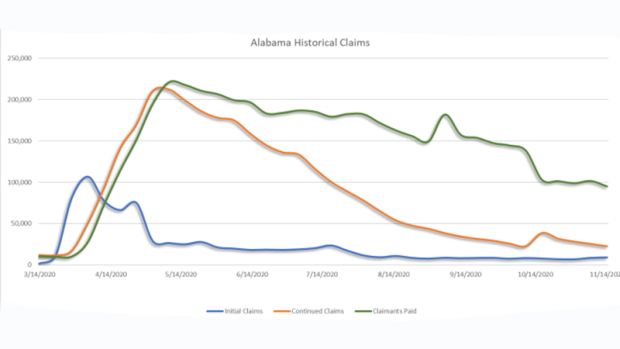 County claims down despite surging virus

Weekly unemployment claims are down in Dallas County, dropping from 93 during the week of Nov. 7 to 83 last week, according to a report released by the Alabama Department of Labor (ADOL), despite an increase of nearly 190 cases of COVID-19 over the past two weeks.

According to the Alabama Department of Public Health’s (ADPH) coronavirus dashboard, Dallas County has registered a total of 2,134 cases of COVID-19 since it touched down in the state in mid-March – 719 confirmed, 415 probable – with a total of 28 confirmed deaths and three more probable deaths.

Cases of the coronavirus have been on the rise nationwide and Alabama is no exception – the state added just under 27,240 new cases of the disease over the last two weeks and has thus far seen more than 3,100 residents die from the disease.

Weekly unemployment claims followed that trend statewide – the most recent report showed 9,262 Alabamians filed for unemployment last week, an increase of nearly 500 over the week before.

Just over 3,000 of those claims were related to the ongoing coronavirus crisis.

First-time unemployment claims were up nationwide last week as well, climbing from 709,00 during the week of Nov. 7 to 742,000 last week, though continuing claims hit a pandemic low of roughly 6.37 million last week.

While Dallas County’s numbers tumbled modestly, many of its closest neighbors saw claim numbers rise last week – Autauga County registered 94 first-time claims last week, up from 68 the week before, and Lowndes County saw its claim numbers double from 17 in the Nov. 7 report to 34 last week.

Marengo County likewise saw an uptick in first-time claims, climbing from 37 during the week of Nov. 7 to 46 last week, as did Perry County, which registered 29 initial claims last week compared to 17 the week before.

Wilcox County also saw a rise in weekly claims, ticking up from 20 in the Nov. 7 report to 31 last week, as did the Black Belt’s Barbour, Bibb, Greene, Lee, Monroe, Montgomery, Pickens, Pike, Russell and Tuscaloosa counties.

Jefferson County continues to be the hardest hit by pandemic-induced unemployment, adding 1,471 initial jobless claims last week, though the most recent numbers represent a week-to-week decrease in claims for the county.

The unclassified sector of the state’s workforce continues to contribute the largest share of weekly unemployment claims, adding over 3,700 to last week’s numbers, while other major industries continue to be hit – the manufacturing sector shed 875 jobs last week, while the administrative and support and waste sector contributed 799 to last week’s count and the retail trade sector lost just under 750 jobs.

Other sectors feeling the burn include the healthcare and social assistance sector, which shed 688 jobs last week, and the accommodation and food services sector, which made up 581 of last week’s claims.

The sounds of gunfire on the streets of Selma have become more common lately, as have the reports of wounded... read more