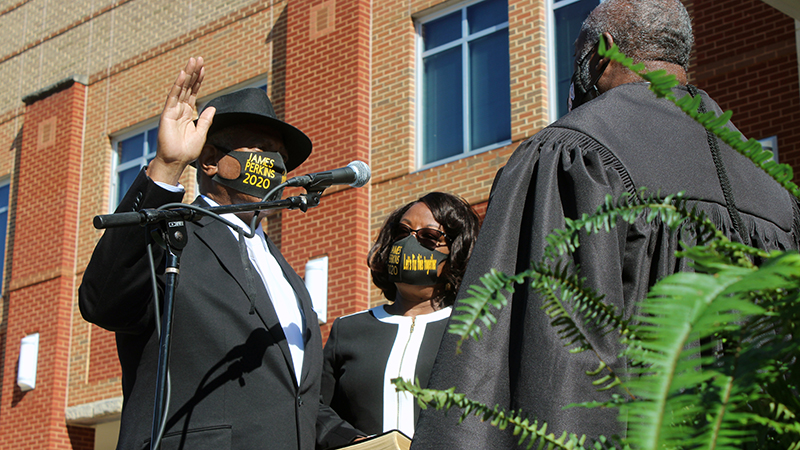 With everything dappled in sunshine and a slight chill in the air, Selma’s new mayor and city council were sworn into office Tuesday during a noontime ceremony in front of Selma High School.

Just before the ceremony, emceed by Alabama Rep. Prince Chestnut, D-Selma, began, new and outgoing  mask-clad council members could be seen mingling with one another and the small contingent of supporters gathered at the outdoor, socially-distanced event.

Chestnut called the event to order and, after the crowd recited the Pledge of Allegiance and bowed their heads for a prayer, led a round of applause for all former city officials gathered for the inauguration ceremony.

One after the other, the new council members took to the makeshift stage to take the Oath of Office, each swearing to defend the Constitution and execute their 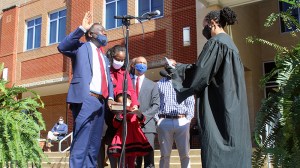 position as leaders to the best of their abilities.

“This gavel is a gavel of peace in the midst of confusion,” Benjamin said, noting that there will be times when the new president will want to “furiously” wield the instrument.

Young then launched into a Sunday morning-like oration, noting the high winds of Hurricane Zeta’s recent attack, which gave way to peace thereafter.

“Selma, storm clouds did rise and strong wind definitely blew,” Young said. “But there was peace after that great storm.”

Young noted how residents rose to the occasion after Zeta, taking to the streets to remove downed trees and lending a hand to neighbors in need, and praised that spirit of “unity” and “togetherness.”

“That is what Selma wants in its municipal government,” Young said, adding that there was a need for “civility” and the ability to “disagree and move on.”

After delaying a scheduled organizational meeting due to some council members still going without power, Young promised “proper decorum” in council meetings but made few assurances beyond that.

“The only promises that we make is that we will always do what’s in the best interest of Selma, Alabama,” Young said.

For his part, Perkins echoed Young’s sentiments and said that he is “prepared to make the sacrifices necessary” to move the city forward, which might include healthy doses of “tough love.”

“There’s a lot of work to be done,” Perkins said.