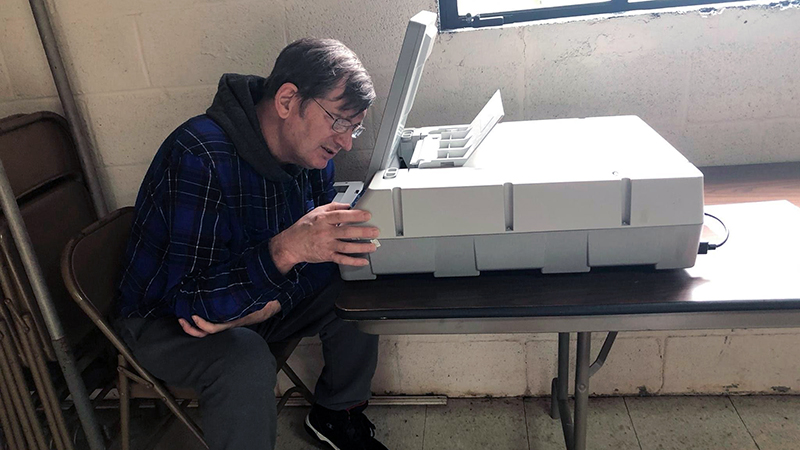 VIP President William Bowman said there is one piece of technology that is particularly important to the visually impaired community as Nov. 3 approaches – the

ES&S AutoMARK, a ballot marking device designed to provide privacy and accessibility to voters who are blind, vision-impaired, or have a disability or condition that would make it difficult or impossible to mark a ballot.

“The AutoMARK is really easy to use,” said Bowman. “You just place your ballot into the machine and it magnifies the text so it’s easier to read. It can even read the ballot aloud… If someone is unable to use their arms, they can put a straw in their mouth and use the touchscreen.”

Bowman said the AutoMARK machine came about after the Help America Vote Act (HAVA) of 2002 which was passed by Congress and subsequently passed into law by President George W. Bush in 2002.

Prior to the introduction of the AutoMARK to polling places, Bowman said the visually impaired had to rely on a family member to accompany them to the polls or have a poll worker read the ballot aloud to them, removing the sense of privacy that should accompany the act of casting a ballot.

“I remember when I turned 18, my dad coming into the booth with me and reading the ballot aloud,” said Bowman.

Though HAVA was passed in 2002, which legally required polling place to be equipped with an AutoMARK, Bowman said it was still some time before his polling place had the machine, ready for him to use.

“For whatever reason, Dallas County is usually a little slow to catch up with the rest of the world,” he said.

Bowman said in the event his polling place did have the machine, it was not set up and that poll behaved as thought they could care less about setting the machine up for him.

Bowman recounted attempting to vote during the 2016 Presidential Election.

Bowman arrived at his assigned polling place to cast his ballot and there was not an AutoMARK on the premises.

Two AutoMARK machines had to be driven from the Dallas County Courthouse to Bowman’s polling place, neither of which worked properly.

Bowman said he then resorted to having a poll worker assist him with the ballot, but his sense of privacy vanished.

After a comment from someone next to him about who Bowman was going to vote for, he said he left the polling place in frustration.

As Election Day approaches, Bowman wants to remove all the barriers visually impaired voters face by spreading awareness about AutoMARK Machines and if visually impaired or disabled voters arrive and there is not one available, Bowman said to call the Alabama Secretary of State’s Office at 334-242-7200.

“There should not be any barriers in place to keep anyone from voting,” said Bowman. “Particularly in Selma, the cradle of the Voting Rights movement.”

Bowman said anyone with questions about using AutoMARK Machines or what to do if a polling place does not have one can call him at 334-354-4015.