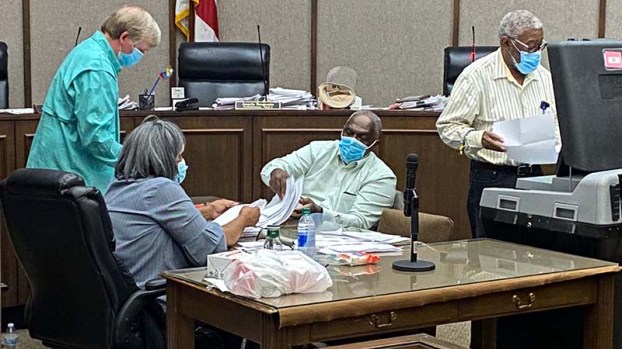 Selma voters went to the polls in the city’s runoff election Tuesday and widely elected James Perkins Jr., who served as the city’s mayor for two terms between 2000 and 2008, to another stint in city hall.

The Selma City Council President’s race was a closer match up, but in the end Warren “Billy” Young claimed victory with 3,419 votes compared to opponent Lydia Chatmon’s 2,637 votes.

In the Ward 2 race for the Selma City Council, Christie Thomas bested Landon Nichols, 393-334, while Clay Carmichael finished ahead of Mead Walker in the Ward 3 race, 466-413.

The final spot on the Valley Grande City Council will come down to the 61 provisional ballots, which will be counted Tuesday – Bruce Hughes leads incumbent Tammy Troha 127-118 for the Place 4 council position.

Early in the day, volunteers with the Black Belt Community Foundation (BBCF) and the Selma Center for Nonviolence, Truth and Reconciliation (SCNTR) – through their Truth, Racial Healing and Transformation (TRHT) initiative – were out at the polls rallying people to vote.

“We always participate in getting people to vote,” said SCNTR’s Callie Greer, who was at the Dallas County Courthouse around midday delivering meals to poll workers. “This is nothing new, this is just a continuation of what we do.”

Beneath a purple tent at polling places across the city, volunteers handed out prizes and boosted the morale of voters from behind a table topped with a cloth covered in superhero regalia.

Greer said the superhero theme, which adorned flyers for the effort, stemmed from the SCNTR’s mission of nonviolence.

“You have to be a superhero to be nonviolent,” Greer said.

Selma voters will cast ballots Tuesday, Oct. 6, in the city’s runoff election, which will finally decide who will serve... read more