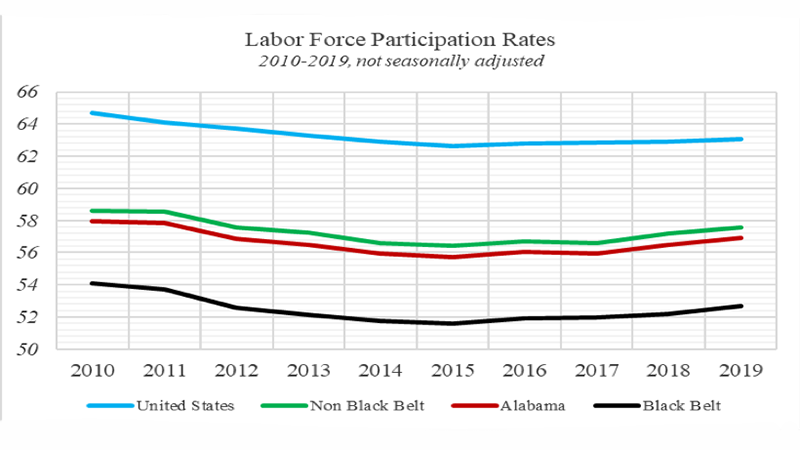 The EPC’s study looked at 24 counties often included in the Black Belt – the state’s hazy definition of the region became a topic of discussion later in the press call – and found that they “have a labor force participation rate that is 20 points below the statewide average.”

“This reality has important consequences on every aspect of life in these rural counties and the people who live in them,” an EPC brief stated. “Our challenge is to make work pay, so that the Black Belt’s best export is not their people.”

Noel Keeney, lead researcher on the labor participation report, noted that, over the last ten years, the rate of labor force participation in the Black Belt remained “stagnant” or “decreasing” until April 2020, when numbers shot up.

Keeney attributed the increase to people returning to the labor force, which consists of both those working and those looking for work, due to financial hardships incurred by the ongoing COVID-19 pandemic.

Between 2010 and 2018, the Black Belt’s total labor force declined from roughly 298,000 to just over 280,000 – a graph illustrating that decline showed that, during the same period, the country saw its labor force increase by roughly six percent, the state experienced a roughly two-percent increase in labor force numbers, with non-Black Belt counties seeing an increase of just over three percent, while the Black Belt saw its numbers decline by more than five percent.

Autauga County, which was not identified as a Black Belt county, ranked 10th for highest labor force participation.

According to the EPC’s research, at least some of this divide can be attributed to the difference between life in rural and urban areas, the latter of which has seen lower declines in labor force participation.

After laying out the data, a series of panelists discussed the findings and the efforts they believe will be effective in allaying some of the region’s longstanding and destructive problems.

For EPC Director Stephen Katsinas, that means developing an actionable and comprehensive strategy for addressing the region’s workforce, which includes reaching out to area students and extending more opportunities to workers.

One of the panelists taking part in Monday’s discussion was Alabama Office of Apprenticeship Director Josh Laney, who noted that “rural communities have been struggling for a long time.”

“We can only control what we can control,” Laney said. “What we can do is work on the systems and structures in our state…to make us more resilient.”

Laney noted that his office has been working to increase labor force participation b using apprenticeships as a vehicle for workers to access better jobs and higher wages.

“We’ve had some success with that in the Black Belt,” Laney said. “We’re really looking forward to the continued opportunity to grow.”

“It’s really hard for them to be what they can’t see,” Hull said.

“It takes all of us working together to solve these problems in the Black Belt,” Jones said. “We need to take these comprehensive plans that we’ve been talking about for years and put them into actionable programs.”

While Jones noted that it will require a unified effort on the part of school leaders, community leaders and others, he added that elected leaders have an outsized role in any progress made in the area.

“It’s going to take a grassroots effort that going to have to be worked on by all of us, but mostly those [local elected] leaders,” Jones said. “Everything that we’ve seen that has been successful in the Black Belt has been built on relationships.”

While the series, which will continue for the next several weeks, continues to examine the reality of the myriad issues impacting the Black Belt and its people, as well as ideas that might be employed to remedy those issues, the role that institutional racism has played in the Black Belt’s decline was only briefly discussed.

“My own personal view…is that I think we need constitutional reform in Alabama,” Katsinas replied when asked about racism’s role in the region’s struggles. “The fact that we don’t even have a definition of the Black Belt says a lot about the commitment we’ve made to it.”

While Katsinas credited Alabama Gov. Kay Ivey for positive strides made to improve life for residents of the Black Belt, he noted that support for the region is often an afterthought – while statewide reform is needed, he said, stakeholders must be invested in “what’s possible now” rather than what might come down the pipeline from Montgomery in the future.