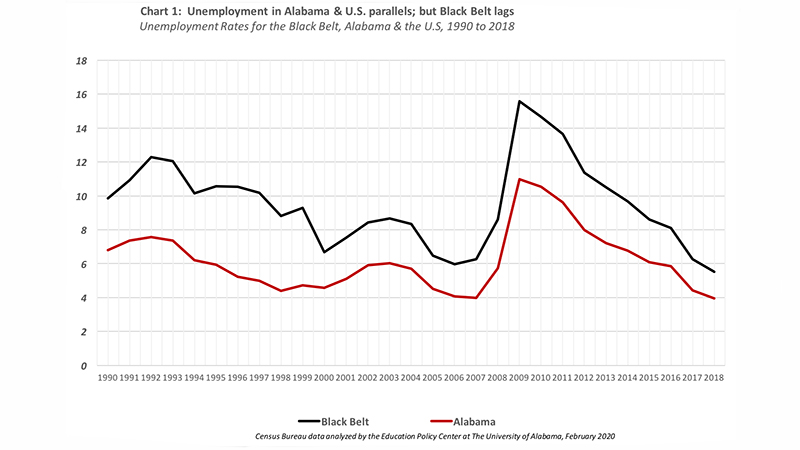 Over the past two weeks, the University of Alabama’s Education Policy Center (EPC) has explored the declines in population and school enrollment across the Black Belt as part of its series exploring the region’s various ongoing struggles.

The third installment focused on unemployment in the region and found that, while the Black Belt’s unemployment rate closely parallels that of the state, the region often sees numbers up to four percentage points higher.

During a brief press conference Tuesday morning, EPC Research Associate Hunter Whann noted that as of November 2019, the 18 counties suffering the state’s highest unemployment rates were all located in the Black Belt.

Even when the state sees improvement, the Black Belt does not enjoy the same progress.

Despite the ominous nature of the data, help has been trickling in – Alabama Gov. Kay Ivey recently awarded over $1 million in grants to spur job growth in the Black Belt and Sumter County received $750,000 last month for infrastructure improvements, which follows a $600,000 grant to improve the Port of Epes.

According to EPC Director Stephen Katsinas, the COVID-19 pandemic has likewise disproportionately impacted the Black Belt, with 17 of the region’s 24 counties above the statewide unemployment average of 8.2 percent as of July.

“The region is struggling, but they’re not taking it sitting down,” Katsinas said, noting that the Black Belt could be in for a “long economic recovery” due to its outpacing of the state and nation in terms of unemployment levels.

Additionally, more than $4 million in federal assistance has come down for agencies that provide the region with “food, rent and medicine,” according to the EPC press release.

During Tuesday’s press conference, a number of prominent Black Belt voices were on the line to discuss what issues they have seen in their communities and how they have gone about addressing those issues.

For Thomasville Mayor Sheldon Day, a lack of widespread access to today’s technology, specifically high-speed broadband internet service, is one of the region’s biggest hurdles, an issue he said has “exacerbated problems [in the region] for generations.”