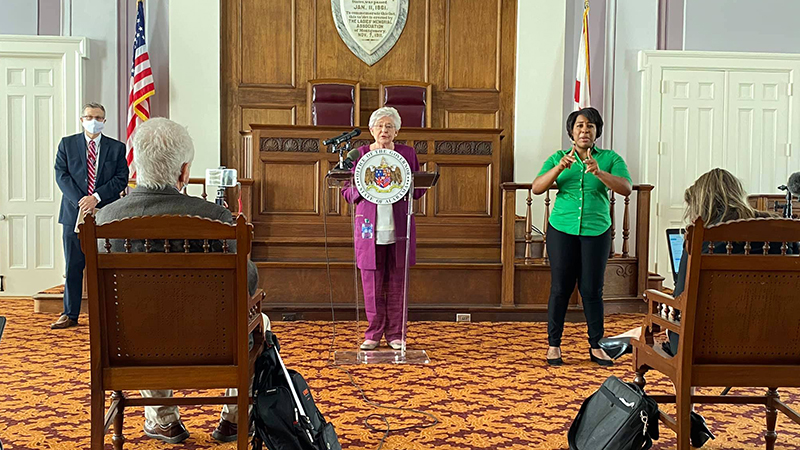 On Thursday, Alabama Gov. Kay Ivey held a press conference in Montgomery alongside Alabama State Health Office Dr. Scott Harris, in which she announced that the state’s current “Safer at Home” order, previously set to expire at the end of the month, would be extended through Friday, Oct. 2.

“Folks, I understand you don’t want to wear the mask, I don’t either,” Ivey said. “I wish we didn’t have to wear masks, but we are seeing significant drops in our hospitalizations and daily COVID-19 number and I have no doubt this is a result of our mask ordinance. Wearing a mask is simply the right thing to do.”

Ivey noted that wearing a mask is an effective way of protecting neighbors, family members and others and offered praise for Alabama educators now adding health guidelines and virtual instruction to their already-hectic schedules.

The governor added that people should continue to remain vigilant, even as high school football returns and college teams prepare to return to the gridiron.

“We should not be deceived that being vigilant against COVID-19 during the day ends when the football game begins,” Ivey said, noting that spectators should continue to observe health guidelines – regular hand washing, wearing a mask and maintain a six-foot distance from others – which have been in place for the majority of the pandemic’s months-long attack on the state.

Ivey also commended Tuscaloosa Mayor Walt Maddox and leaders at The University of Alabama (UA) for taking swift action to address growing case numbers in the area caused by college students ignoring safety protocols – more than 500 cases of COVID-19 were found among UA students and faculty within the first week of the university’s reopening.

“Ultimately, it is up to each individual to do our part,” Ivey said. “We all want to get back to normal and the way to do that is by wearing a mask.”

Harris followed Ivey and provided a bird’s eye view of the current situation in the state – according to Harris, nearly 120,000 Alabamians have been infected with COVID-19 and nearly 2,00 have died from the disease, but numbers are ebbing in the right direction.

“We are cautiously optimistic about what we’ve been seeing recently since the governor’s mask mandate went into effect,” Harris said, noting that deaths are declining, hospitalization rates are at their lowest since before the Fourth of July holiday and positive tests rates have declined to roughly eight percent, down from around 17 percent in July.

“We know we’re asking you to do something nobody wants to do,” Harris said. “But we appreciate your willingness to do what it takes to keep this disease from spreading.”

Harris noted that there is “trepidation” about the upcoming Labor Day holiday – judging by the impact of earlier holidays, Memorial Day and the Fourth of July, Harris fears that Labor Day might provide the right environment for an uptick in cases.

“[Memorial Day] weekend has the opportunity to cause a lot of spread if people aren’t careful,” Harris said, adding that people should get their flu vaccinations as soon as possible before the merger of the pandemic and flu season.

“We’ve made a lot of progress,” Ivey said elsewhere. “We don’t want to lose any of the ground we’ve already made.”