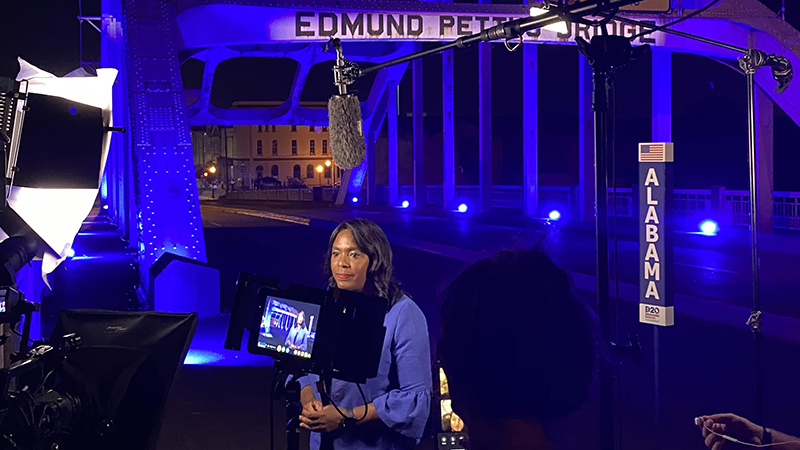 During the second night of the Democratic National Convention, held virtually this year in light of the ongoing COVID-19 pandemic, Democrats held their customary roll call vote to officially nominate former Vice President Joe Biden as this year’s presidential candidate.

However, this year’s roll call was a little different.

“Roll Call Across America,” as it was called by organizers, traveled to all 50 states and the U.S. territories for a filmed moment with delegates across the nation.

From the foot of the Edmund Pettus Bridge, radiating with fresh blue light, U.S. Rep. Terri Sewell, D-AL, took part and cast her vote for Biden.

This year’s convention marks the second time that Sewell and her mother, Nancy Sewell, have served as delegates for Alabama.

“Although the Democratic Convention is being held virtually, we have enjoyed participating in the numerous festivities, meetings, and various events online,” Sewell said in a statement released ahead of the roll call Tuesday night. “I am very excited to represent Alabama in tonight’s ‘Roll Call Across America’ at the foot of the Selma bridge.”

During her spot, the first in the segment, Sewell paid homage to her late colleague, Congressman John Lewis.

Sewell called for restoration of the Voting Rights Act before announcing Alabama’s vote in the convention.

According to Sewell, Alabama cast eight votes for U.S. Sen. Bernie Sanders, I-VT, for the nomination and 52 votes for Biden, who she called “the next president of these United States.”