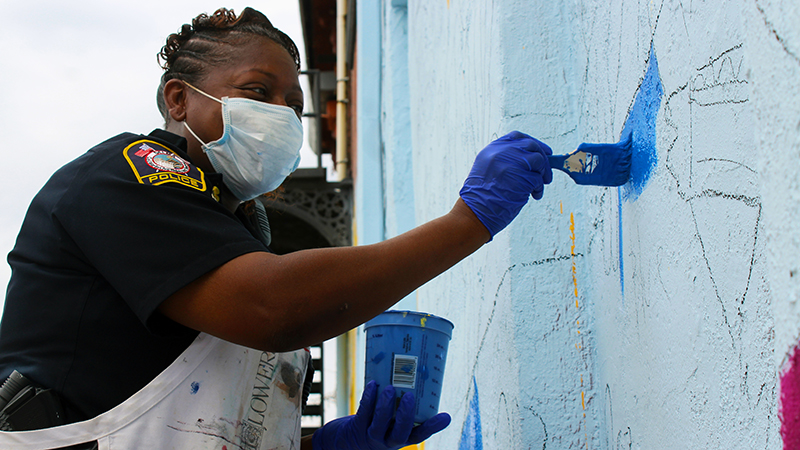 A slight trickle of rain fell from an overcast sky as amateur artists descended on the downtown brick wall which will serve as home of a new mural by Trés Taylor, the self-taught Birmingham artist responsible for the enormous mural installed at Phoenix Park last year, on Friday morning.

“It’s a good experience,” Ghant said. “It’s all coming together and we’re just building a bond with the young people here in Selma.”

That exercise in bond building is precisely what the organizers of the project had in mind when they got the ball rolling several weeks ago.

Young said he wanted to put a project together that would inspire cooperation and unity.

“With all the stuff going on in the nation and the political landscape we see during an election year, we wanted to show a little unity,” Carmichael said.

After Young and Carmichael connected, the duo reached out to Taylor, who immediately signed on, and then went about contacting local law enforcement, school officials, community organizations and others to get involved.

When matching funds were needed for the project, Carmichael and Young started reaching out to local organizations and found several willing to pitch in for the project.

“It just goes like that,” Carmichael said. “You reach out and ask if someone wants to get involved and usually they do.”

On Thursday night, the group of community volunteers and project organizers got together for opening ceremonies, during which Taylor presented a sketch of the mural.

That sketch was displayed on the downtown wall via a projector and the team went about tracing the design, making it possible for anyone to show up and take part in painting the image.

The mural, entitled “Coming Together,” shows people coming to see and be blessed by Queen Selma, who carries magnolias representing dignity, which will be released into the Alabama River.

The project is part of Taylor’s “Revolution of Joy” art project, made possible through a partnership with national nonprofit Can’d Aid, which he said is a way to give back.

“I have been making art for 20 years and it has been a beautiful, incredible journey of meeting people and being able to support a family with something you love doing,” Taylor said in a press release. “Now that I look at the beginning of my last quarter, I’m seriously thinking it’s time to give back.”

Volunteers will be on hand as early as 6 a.m. Saturday to work on the mural, which is expected to be completed later that day.