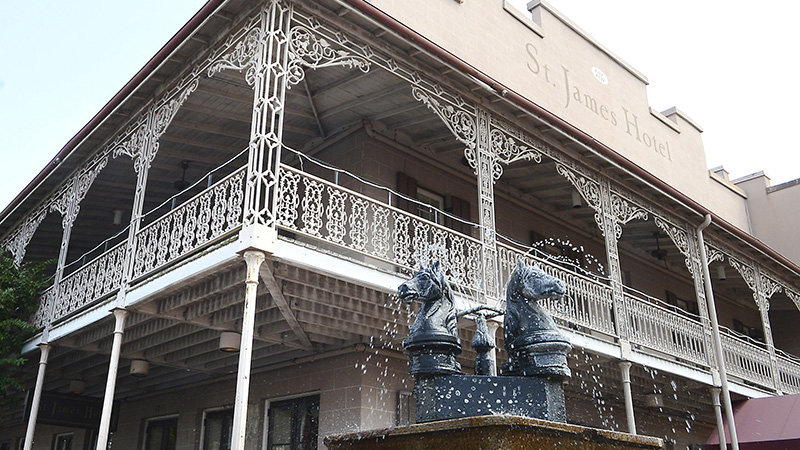 A fundraising event is being held Tuesday evening at the historic St. James Hotel. The event, which is scheduled to start at 5 p.m., will be raising funds for the day-today operations of the hotel.

According to Rhaglan Hospitality CEO Jim Lewis, the St. James Hotel is well on its way to opening its doors to the public.

“We will reopen sometime during the fourth quarter,” Lewis said. “The only remaining timing concern is regarding furniture fixtures and equipment and just supply chains that have been disrupted by COVID-19. Construction has gone really well, the building is stabilized, and we’re really happy with the way it’s turned out.”

Once those minor kinks are worked out, Lewis said, a firm opening date will be set.

Despite that progress, Lewis and the St. James Hotel are being hampered by Selma Mayor Darrio Melton’s continued refusal to sign a U.S. Department of Agriculture (USDA) document.

“Basically, we turned in all of the documents to the regional for the USDA going back now two months ago,” Lewis said. “The local office reviewed them, the papers went up to national and national said, ‘Hey, you’re missing a form.'”

Lewis said the form, which requires the signature of either the mayor or Selma City Council president, is the last it needs to move forward.

“Everything else has been signed,” Lewis said.

The contract between the city and Rhaglan Hospitality states that the city will facilitate getting the hotel up and running, specifically through tax abatements approved by the council and  a $125,000 cooperating grant from the USDA.

Essentially, as it pertains to the USDA grant, the city is supposed to serve as a go-between for the department and the hotel.

Though the document can be signed by either the council president or the mayor, Selma City Council President Corey Bowie stated that he keeps “running into roadblocks” while attempting to move the process forward.

Bowie noted that Selma City Attorney Major Madison is currently looking into the procedures specified in the contract to ensure that the city is in compliance.

It is unclear why Melton has not yet signed the document – multiple sources alleged that the impasse stems from a campaign event for mayoral candidate Miah Jackson held at the St. James Hotel earlier this summer, which the mayor perceived as either an ethics violation or a conflict of interest – as neither Melton nor Madison responded to a request for comment.

Lewis noted that he sent an email to Madison Thursday in reference to the delay – Lewis said that he started by reinforcing his desire for a “positive relationship” with the city, but added that the failure to sign a “mundane” document was unacceptable; if the delay continues, Lewis said, he will have no alternative but to seek “legal remedies.”

So far, Lewis has not received a response to his email.

“It is causing immense frustration on the part of the lender,” Lewis said.

The possibility of having to seek “legal remedies” is one Lewis is hoping to avoid, as he sees immense potential in the Queen City.

“Selma has a unique promise,” Lewis said. “It’s got the historic infrastructure of 1,200-plus historic buildings that have survived, the history behind those buildings and Selma’s position as the lead center for commerce in Alabama before the Civil War…that certainly does not by itself make Selma unique, but it makes Selma part of a small, unique community across the nation. Secondly, of course, the events of Bloody Sunday gives Selma worldwide recognition. Selma is an easily recongizable name that people associate with this small community of 20,000 people and there are only a handful of towns in the world of that size that are so easily recognized.”

And Lewis has plans to do more work in Selma, assuming the current dysfunction doesn’t leave behind a sour taste.

“We want to do more in this community,” Lewis said. “We’re actively exploring more opportunities and we’re at a fork in the road where, if it looks like this is going to continue, we’d be forced to open the St. James and do no more.”