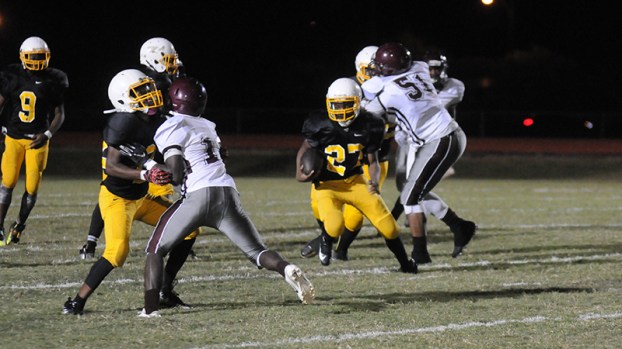 Ellwood Christian’s Kentrell Simmons cuts to the sideline and sprints 80 yards for a touchdown on Thursday night at Memorial Stadium against A.L. Johnson.

Ellwood Christian Academy becomes the first Dallas County school to cancel its football season  because of the COVID-19 pandemic.

ECA Pastor, Principal and Athletic Director Gary Crum notified the Alabama High School Athletic Association (AHSAA) that the Eagles will not field a football team this season. ECA will also not play volleyball and soccer.

The Eagles were scheduled to open their season on Aug. 28 at Prattville Christian Academy.

“We’ve decided to opt out of fall sports because of the coronavirus,” Crum said. “There’s so many unanswered questions and the unknown about the coronavirus and where it came from.”

Crum said the risk was too great to have athletics in the fall.

“The safety of our coaches and players are important,” Crum said. “A lot of the kids stay with their grandparents. We didn’t want to run the risk of the kids bringing the coronavirus to their families. I couldn’t live with myself if that happened. The church is closed and I’d look like a hypocrite if we let the kids play fall sports.”

The Eagles are members of Region 3, Class 1A and was scheduled to face Keith High on Oct. 16 at J.V. Caldwell Stadium in Orrville.

“I hate it because we were going to have our largest football team,” Crum said. “I was looking forward to Coach Skanes rebuild our football program.”

ECA has reached the 1A state playoffs twice in its 10-year history that began during the 2010 season. The Eagles’ only playoff win came against J.U. Blackshear in 2014. ECA has lost two of its postseason games.

Until after the 2009-2010 school year, ECA was known as Central Christian Academy when Ellwood Community Church purchased the school and changed the name to ECA.

Crum said that ECA will play the other sports, basketball, baseball, track and softball by ear.