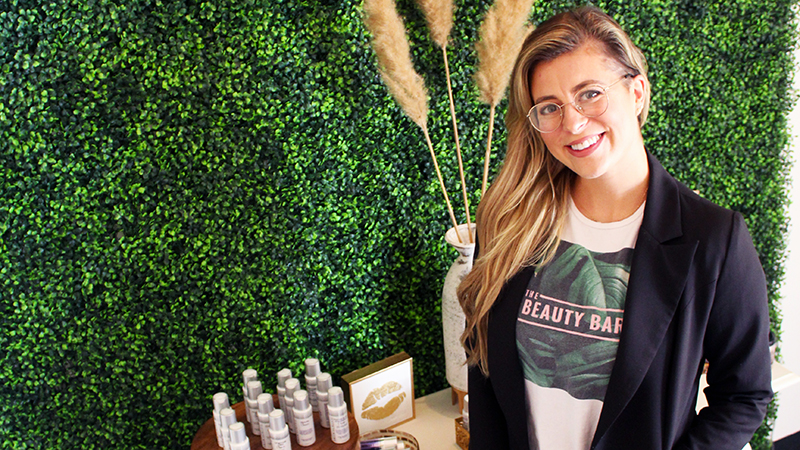 Tucked into a small shopping center off Dallas Avenue, The Beauty Bar is a unique business in the Queen City, which offers a variety of services aimed at making customers feel “rejuvenated and refreshed.”

The experience begins right as the door opens – the new space, previously one wide-open room split by a small wall separating the lobby from the back rooms covered with curtains in place of doors, features a bold, green, leafy display featuring the name of the business in its cursive logo above a table of beauty supplies; a new wall has been installed between the two rooms, which are dimly lit and play host to the multitude of services provided there.

For Mary Peyton Zimmerman, owner of The Beauty Bar, the road from opening in December of last year to completing renovations in the middle of a pandemic has been a whirlwind.

“It’s been so crazy how people have so excited and so supportive,” Zimmerman said, noting she already has appointments booked into November. “It just kind of all happened.”

Zimmerman, a Selma native and graduate of Morgan Academy, spent several years working in the beauty and aesthetics industry before returning to her hometown to open her own operation – working in Tuscaloosa, then Birmingham and Prattville, Zimmerman worked as a medical aesthetician and nutrition coach, worked in medical spas and plastic surgery clinics and even ran a small operation out of a local hair salon before first spotting the open office space on Dallas Avenue.

“I saw this little place and said, ‘Yeah, I’m going to go for it,’” Zimmerman said. “So, somehow I’m back here. I always wanted to open a business – never did I think it would be in Selma, but it’s been such a blessing. I wouldn’t want it anywhere else.”

Zimmerman spent two weeks fixing up the space before officially opening in December 2019 during an event that required to participants to pitch in a canned good to be donated to the Selma Area Food Bank (SAFB).

“Since I’ve been back in Selma, I’ve really felt called to do things for other people,” Zimmerman said.

“I just kind of created a following,” Zimmerman said.

The Beauty Bar offers a variety of beauty services, including facials for men, women and teens, acne treatments and chemical peels, massages, spray tans, tinting and waxing – after recently completing a training program in Birmingham, Zimmerman will now be able to offer micro-blading services as well, cosmetic tattoos for eyebrows.

The pandemic threw a wrench in Zimmerman’s plans, though – an upstart yoga program had to be called off and her one-on-one business slowed to a crawl.

“We have a lot of personal interaction with our clients,” Zimmerman said. “During quarantine, I couldn’t do that and it made me feel sad. What’s the point of life if you can’t help other people?”

But Zimmerman didn’t slow down – a recent weekend was spent renovating the building, with Zimmerman herself helping to install walls and doors and more, which played host to Zimmerman’s recent wedding, canceled in May due to the pandemic.

The idea of providing people with an escape plays a large role in Zimmerman’s business, which she said allows people to “rejuvenate and refresh.”

“I honestly feel like when people come here they reconnect and relax,” Zimmerman said. “It’s all about helping people relax and escape from everyday life. That’s what I always go back to – this is a place that’s all about ‘you’ time. There’s so much more to life – we spend so much of our time working that we don’t take enough time for ourselves.”

For more information, contact Zimmerman via email at thebeautybar36701@gmail.com.